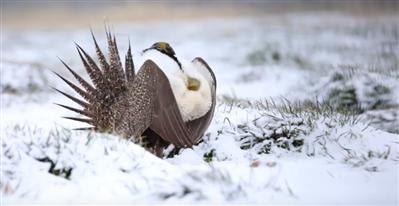 The Interior Department, Idaho and Wyoming are appealing a court ruling that halted a Trump administration plan to ease land-use restrictions in seven Western states that protect struggling sage grouse.

The notices filed Monday say the agency and states will seek a review by the 9th U.S. Circuit Court of Appeals of an October ruling temporarily preventing the U.S. Bureau of Land Management from carrying out the plan.

Idaho and Wyoming back the Trump administration plan that eases restrictions on energy companies and other industries put in place by the Obama administration.

The Trump administration in March finalized the plan that it said would ease restrictions while also protecting greater sage grouse. The birds are found in 11 Western states, but the lawsuit involves plans in Idaho, Wyoming, Colorado, Utah, Nevada, northeastern California and Oregon. Between 200,000 and 500,000 sage grouse remain in 11 Western states, down from a peak population of about 16 million. Experts generally attribute the decline to road construction, development and oil and gas leasing.

Sage grouse are chicken-sized, ground-dwelling birds considered an indicator species for the health of vast sagebrush landscapes in the U.S. West that support some 350 species of wildlife. The males are known for performing an elaborate ritual that includes making balloon-like sounds with two air sacks on their necks.

Several groups intervened in the case, and they are also appealing. They include the National Cattlemen’s Beef Association, Public Lands Council, Petroleum Association of Wyoming, Western Energy Alliance and the Wyoming Stock Growers Association.

The lawsuit has a convoluted history that started when environmental groups weren’t satisfied with sage-grouse protections put in place by the Obama administration in 2015.

Those 2015 plans included last-minute restrictions in key sage grouse habitat intended to prevent the bird from being listed under the Endangered Species Act. Such a listing could have brought increased restrictions to grazing, energy development and other activities across some 270,000 square miles (700,000 square kilometers).

With the plan in place, the U.S. Fish and Wildlife Service opted not to list sage grouse.

But the Trump administration eased the Obama-era restrictions with amendments earlier this year.

The environmental groups filed a supplemental complaint to their lawsuit, leading to the injunction and now an appeal to the 9th U.S. Circuit Court of Appeals.

Branding: The Debate of the Ages Has Some New Science Behind It