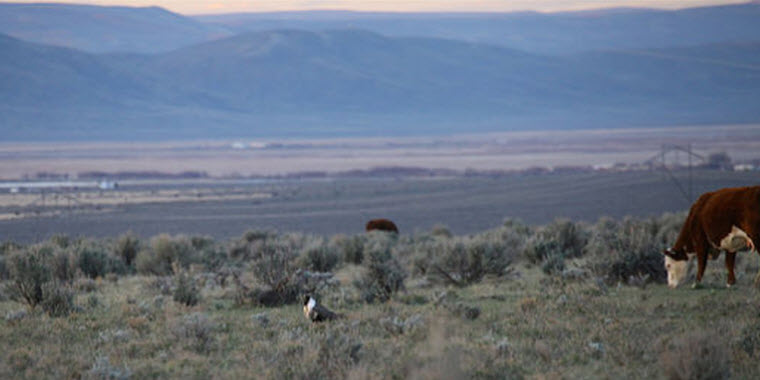 WASHINGTON (June 28, 2016) – Today, the Senate Energy and Natural Resources Subcommittee on Public Lands, Forests and Mining held an oversight hearing on the Federal sage grouse plans and their impact to successful ongoing state management of the species. Brenda Richards, Owyhee County Idaho rancher and president of the Public Lands Council, testified on behalf of the PLC and National Cattlemen’s Beef Association. Richards said that any Federal management plan must first recognize the essential contribution of grazing to conservation.

“Ranchers across the west have a vested interest not just in the health of their livestock, but in the rangelands that support their herds and the wildlife that thrive alongside them,” said Richards. “The businesses they operate form the economic nucleus of many rural communities, providing jobs and opportunities where they wouldn’t exist otherwise. Additionally, ranchers often serve as first responders in emergency situations across vast, remote stretches of unoccupied federal lands. Simply put, public lands ranchers are an essential element of strong communities, healthy economies, and productive rangelands across the west.”

Across the west, roughly 22,000 ranchers steward approximately 250 million acres of federal land and 140 million acres of adjacent private land. With as much as 80 percent of productive sage grouse habitat on private lands adjacent to federal permit ground, this makes private partnership essential in increasing sage grouse numbers. However, concern remains that local stakeholder input is being ignored by the Bureau of Land Management.

“Items such as Focal Areas, mandatory stubble height requirements and withdrawals of permits impose radically severe and unnecessary management restrictions on this vast area in opposition to proven strategies,” said Richards. “Rather than embracing grazing as a resource and tool for conservation benefit, these plan amendments impose arbitrary restrictions to satisfy requirements for newly minted objectives such as Focal Areas and Net Conservation Benefit. Wildfire, invasive species and infrastructure are the major threats to sage grouse habitat and they are all most effectively managed through grazing.”

According to the latest data from the Western Association of Fish and Wildlife Agencies’ August 2015 report – Greater Sage Grouse Population Trends: An Analysis of Lek Count Databases 1965-2015, the number of male grouse counted on leks range-wide went from 43,397 in 2013 to 80,284 in 2015.  That’s a 63 percent increase in the past two years and contributes to a minimum breeding population of 424,645 birds, which does not include grouse populations on unknown leks.

“The results of these voluntary, local conservation efforts around the west are undeniable; habitat is being preserved and the sage grouse populations are responding,” said Richards. “Proper grazing specifically addresses the biggest threats to sage grouse habitat, while reduced grazing allows these threats to compound. To arbitrarily restrict grazing when it’s needed most is a recipe for failure. Local input and decades of successful, collaborative conservation efforts must be the starting point for future Federal involvement, not an afterthought as it is now being treated.”

Public lands ranchers encourage the BLM and Federal agencies to work with them to continue to conserve and protect sage grouse habitat.

A copy of Richards’ testimony submitted to the Subcommittee can be found HERE.

From Furloughs to Pay Raises, Things are Looking Up for the Department of Livestock