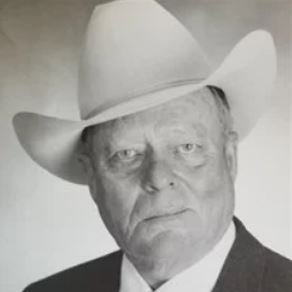 Don’t let his stature fool you. Joe Helle was an absolute giant in the sheep industry. On Tuesday, October 8th in Dillon, at the age of 87 years, Joe was called away by another Shepherd.

Joe Thomas Helle was born to Harold and Alice Helle in Williston North Dakota, May 14, 1932.  He spent his youth enjoying the outdoors and began his destiny in the rangelands of the West while working on the Shipstead Ranch in Scobey, MT.  His adventures included chasing wild horses, herding sheep, and visiting Indian camps, where he shared meals not realizing he was eating “puppy-dog” stew.

Joe went to High School in Fargo North Dakota, where he excelled in swimming and other activities. He then attended college at North Dakota State University.  He would later transfer to the University Of Idaho College Of Forestry where he was the outstanding senior of 1954, the President of the Associated Foresters and was inducted into Xi Sigma Pi.  Upon graduation from University of Idaho with a degree in Range Science he began his career with the Forest Service in Montana on the Vigilante Experimental Range, Beaverhead National Forest.  He administered the many sheep and cattle allotments. At this time Joe was drafted and served two years with the Army Engineer Intelligence group in Korea.  Joe’s biggest regret about being drafted was having to sell his first car, a brand new Chevy!

After returning from the war, Joe completed his Master of Science Degree at U of I, his Thesis on a grazing study in Point Springs Idaho.  Joe returned to the Beaverhead Forest where he fought fires and delivered supplies with mule trains and helicopters.  He told the story of how his belt buckle once saved him from serious injury when he got kicked in the belly by an ornery mule.  While based in Jackson, Joe met and married Agnes (Aggie) Rebish.   Aggie was Joe’s partner in all his endeavors for 57 years. The couple then transferred to the Big Timber District of the Gallatin Forest as District Ranger.  While in Big Timber the couple’s two sons, Tom and John were born.  Joe left the agency in 1965 for an opportunity to develop an irrigated farm in Dillon with partners Pete and Elizabeth Rebish.  They later expanded the farm to include cattle and sheep.  A baby girl, Karen Ann, was born completing the family.

Joe was actively involved in the Montana Woolgrowers and served as President from 1988-1990.  He also served the National Woolgrowers Association holding numerous committee positions.    He served on the original executive board of the American Sheep Industry Association and was chairman of the Wool Council.  He served as director and second vice president of the Western Range Association.

In 1989 Joe represented the University of Idaho College of Forestry, Wildlife and Range Sciences, as one of 100 U of I centennial distinguished alumni.

Joe was a spokesperson for the livestock industry on local and national levels on such issues as wolf reintroduction, public lands grazing, endangered species, and sheep and wool improvement programs.  Joe and Aggie where honored to receive the American Sheep Industry “McClure silver Ram Award” for their years of service and dedication. Joe’s most recent awards were “Honorary President” from the MT Woolgrowers and “Stockman of the Year” from the SW MT Stockman’s Association.

Joe’s passion was for the sustainability of the range and livestock industries.  He can be remembered tending the sheep in the mountains with his children and later his grandchildren at his side.  He passed on his great knowledge of the range, instilling in them the importance of land stewardship.  The livestock industry will be forever grateful for his commitment and tenure.

Probably Joe’s greatest love was for his family and grandchildren.  He never tired of watching them play together as little kids and seeing all the crazy mischief they got into.  He attended as many of their school activities as he could and as they grew older he was so proud of them in their various jobs and academics.  He enjoyed attending community concerts, theatre productions, and played a mean hand of cards at couples bridge.

Visitation will be Wednesday, Oct. 16th at 6:00pm and a Funeral Mass will be celebrated Thursday, Oct. 17th at 11:00 in St Rose of Lima Catholic Church in Dillon, and internment with rite of committal will follow at Mountain View Cemetery.

In lieu of flowers, memorials may be sent to the Montana Woolgrowers Association Memorial Fund.

A Conservation Ordinance and a Fundraiser in Phillips County, what does it all mean?

MT Board of Livestock Holds Hearing on New Livestock Market

Karen and Brad – I just learned that Joe Helle passed away, we are so sorry, but he’s free of all pain and free to do all the things he loves to do. Janice and Delbert High

A real loss to all. Truly a wonderful man, companion and friend. Will be missed

I think Jim Magagna said it about plain as any: “Joe was a colleague that I admired, respected and enjoyed. He was truly a teacher to many of us. Joe faced the many challenges that come with being a sheep producer with wisdom, patience and humor.” Amen.

There simply aren’t words, you will be missed friend and neighbor. A part of my life’s story…

A great loss for the industry and the community. Our thoughts and prayers are with the Helle family.

Joe will be missed in the Dillon Community. He has left a strong family to carry on his work in the sheep and wool industry. I will always remember him as a kind gentleman that lived and supported his family

Joe Helle made me as much a part of his family as I was part of mine.. Joe was a guy that didnt have a lot to say,but when he did you paid attention. His stories about his many life experiences were always attention getters and he told them with a twnkle in his eye and a great pride in his many accomplishments. .He raised a great family and a legacy to be proud of.l

Joe I will miss your smile and your cowboy hat …and u and my dad talking about old times..I am sure u and my dad fred hector r talking up there about ? farming…he my dad enjoyed u when u came to fargo nd ….u will b missed, love fred Earlyne. Carrie …thinking of. Aggie and your kids ? u guys Carrie hector