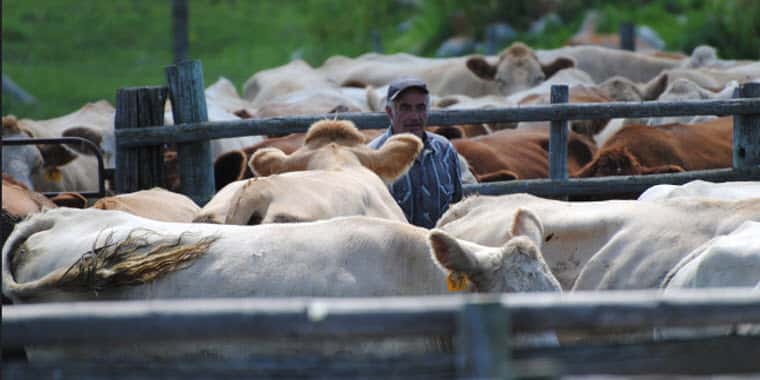 Start talking shrink with cattle producers and you're wandering into touchy territory. It's a negotiating tool; it's a frequent complaint on both sides of the deal; and it's a cost inexperienced sellers can wind up seriously underestimating.

Doug Rogers has a few thoughts on the subject. He sells about 4,000 stockers each year and has been in the business since 1993. Based at Collins, Mississippi, he said one of the keys to his success as a stocker has been having a set of certified scales on his farm.

“I learned a long time ago, weigh them on the ground with your own scales or your neighbor's scales. The scales pay for themselves if you run a fair number of cattle,” the owner-operator of Rogers Bar HR Charolais said.

And it's not uncommon for stocker operations in this part of the country to have scales. The Southeast — and Mississippi specifically — is known as a haven for cattle backgrounding thanks to rainfall in the area of 65 inches per year and lots of poultry litter to fertilize pastures.

While they manage separate operations, Doug, his brother Bernie, his nephews Levi, Blake and Crain, and cousins Harold Parker, Ted Parker and Roger Parker as a family run more than 100,000 head, making them one of the largest stocker operators in the Southeast. Together, they sell around 100,000 head of stockers each year, giving them insights as to how buyers work and an understanding as to how best to limit costs associated with shrink. Rogers said many things he does as a seller to reduce losses due to shrink prior to weighing caves are accessible to any size operator. Here are just a few of those considerations.

1. Pens and Trucks. The No. 1 tip Rogers has for producers? As tempting as it may be, don't pen the cattle until all the trucks are there.

“Smaller operators are often so worried about getting their cattle penned it affects their bottom line. They are scared they can't get them penned and the trucks will have to wait, so they pen them up too soon. The truth is, you are losing money while those cattle wait,” he said. “If the buyer promises three trucks are coming and there are only two, don't pen the cattle. When all three trucks are there, that's when you start to pen them. Cattle will shrink there with no water or grass. When they're weighed, you will have lost more than you think.”

Rogers gets around this by having a 3-acre grass trap that funnels into the pen. Cattle are held in the grass trap until they are moved into the pen and then quickly loaded onto trucks.

“We put them in the grass trap when they tell us to pen the cattle,” he said. “We don't push them or upset them in any way. We have accustomed them to going into this grass trap prior to this. We've even left the pens open with some feed so they can come and go. Once the trucks are there, we move them into pens and onto trucks. We don't have any hollering; we don't want people running around the pen. Yelling will not make you any money.”

2. Don't Pay the Freight. The second tip Rogers has for stockers is to always sell FOB (freight on the buyer). This is especially important for small operators.

While some large stockers have their own trucks and want to control the situation, for those who can't justify that economically or who just don't want that added responsibility, Rogers said it's better to let the buyer handle the freight. If a load exceeds a shrink of 8{2fba0047518ad2e639da733ea78e24abf77cec06f485a26b152e17f2a77aa67a} on the haul, the buyer may complain, he added. So it's important for the seller to understand what he is going to be held to in terms of cost.

He said it's important to consider that a smaller operator trying to handle shipping himself is not going to be the trucking company's priority.

“Say I ship 100 loads, and you ship one load. Which customer will that trucking company send his best trucks to? Which customer gets their most experienced drivers? There are so many things that can happen on the haul, from a truck breaking down to a driver mistake. That's why I encourage smaller stockers to go FOB. If you don't have the expertise to handle the shipping side of this business, don't do it. Do what you do best.”

3. Know Shrink Averages. Rogers said it's important to consider averages for pencil shrink so you know what to expect from a buyer.

4. Low Stress Pays. The last tip is more of a management philosophy Rogers has when it comes to his calves. He believes they need to be accustomed to having people around. Because he uses rotational grazing and worms calves every 60 days, they are not as susceptible to stress on sale days.

While they graze cattle, he said they often take a small sack (50 pounds) of sweet feed, pour it on the ground for calves, then walk among them. This low-stress handling approach gentles the cattle and ultimately helps make a producer money because they are easy to move.

Shrink is not just how much weight cattle lose in transport or marketing. There are different types of shrink, and researchers have even noted that some types of operations show more shrink than others. David Lalman, Oklahoma State University beef cattle specialist, said at its most basic level, there are two types of shrink: fill shrink and tissue shrink. Other factors come into play as well:

– Fill Shrink. Cattle held off feed and water overnight, for example, experience fill shrink. This is loss of rumen fill, manure and urine. This type of shrink is quickly recovered once an animal starts to eat and drink again. Most weight loss on feeder cattle up to pay weight is fill shrink.

– Tissue Shrink. The other type of shrink, tissue shrink is an actual decrease in carcass weight and body tissues. It is usually the result of long hauls.

– Time of Day. A Kansas State University study found allowing cattle to graze till mid-morning resulted in heavier weights and reduced rate of shrink during the first few hours after cattle were gathered. The data showed that cattle gathered at 9 a.m. and sold at 3 p.m. had added value compared to those gathered early in the morning.

– Minutes EQUAL Dollars. Every 30 minutes a group of cattle is moved around in a corral equals an additional 0.5{2fba0047518ad2e639da733ea78e24abf77cec06f485a26b152e17f2a77aa67a} weight loss. This makes it worth the time to sort out cattle one or even two weeks in advance, allowing them time to regain any shrink prior to moving them onto trucks.

– Weaning and Marketing. Preconditioning calves can mean more weight at time of sale and less shrink. Sorting and hauling freshly weaned calves to a sale barn the day prior to an auction could increase shrink. In some cases, shrink in newly weaned calves can be as high as 8{2fba0047518ad2e639da733ea78e24abf77cec06f485a26b152e17f2a77aa67a} if they stand in a yard several hours or overnight. Lalman cautioned it's impossible to say whether selling straight off the farm is better than selling at the local livestock market, because it depends on the livestock market owner and how well the producer has communicated his needs to that owner. Some markets have feeding systems for cattle held overnight, for example. However, if the sale is big, and cattle may be standing without feed all day, shrink can become more of an issue.

– HAUL Conditions MATTER. Too many, or too few, cattle will increase shrink on a haul. The standard load is considered 50,000 pounds, or about 80 600-pound calves. Other factors include whether the truck is covered, whether footing is good and whether sand is on floors to make them less slick.