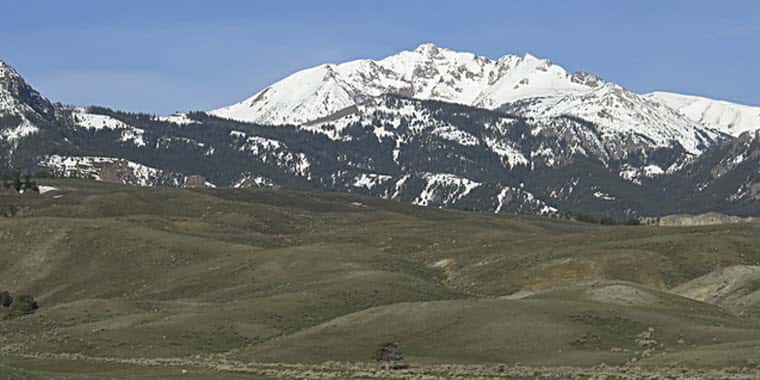 April marked the start of a major weather pattern change which brought much needed precipitation to Montana, and while April was a wet month, May was even wetter in certain areas. Some of the largest totals were in southwest Montana and northern Wyoming where precipitation ranged from 5 to 11 inches and set records for highest May precipitation in over 40 years at some SNOTEL sites.

Mountain precipitation was lowest in parts of Central Montana, the Flathead Lake area, and the Upper Clark Fork region where totals ranged from about two to five inches in May, which compared to normal is about 70% to 100% for those regions.

“This weather pattern change was just in time as snowpack conditions were looking grim on April 1 in all locations except northwest Montana and the northern Rocky Mountain Front,” said USDA Natural Resources Conservation Service (NRCS) Hydrologist Eric Larson. April and May combined brought more precipitation than January through March at most SNOTEL sites in the region. Many sites, particularly in southwest Montana, have received over 10 inches in the last two months.

High elevations in the Beartooths, Northern Gallatin Range, and Tobacco Root Mountains received over 15 inches in the last two months, which is double what they received in January through March. All of Montana’s major river basins currently have had near normal water year precipitation, except for the Smith-Judith-Musselshell and Milk River basins, which have received about 80% of normal precipitation since October 1.

As a result of the above normal precipitation over the last two months, the snowpack has improved significantly. On June 1, basin wide snowpack percentages ranged from 140% in the Upper Yellowstone to over 500% of normal in portions of the Bighorn Mountains. “These percentages are the highest they have been all year, but when considering conditions earlier this season a much different picture is painted,” said Larson. In southwest and central Montana lack of precipitation at all elevations from mid-January through March left some SNOTEL sites with their lowest snowpack on record for April 1.

April and May precipitation did bring snow to upper elevations, but mid- and low-mountain elevations received rain and as a result that snowpack peaked early and low. Mid-to-low elevation snowpack is an important component of the seasonal snowpack and the lack of it this season will likely show in overall snowmelt volume this season.

In northwest Montana, snowmelt that began in earnest at the end of April continued to progress in May at rates that were close to normal and most streams in the Kootenai, Flathead, Clark Fork, and Bitterroot basins observed flows in May that were normal for this time of year.

Looking forward, the Kootenai, Flathead River, and northern Rocky Mountain Front have had consistent precipitation and snowfall this winter and are forecasted to have well above normal streamflows for the June through July period. “Conditions east of the Continental Divide have improved significantly since April 1 and streamflows are now forecasted to be above normal for June through July, but it is also important to consider timing,” said Larson.

The large snowpack deficit earlier this spring combined with cooler weather caused below normal flows in April and May east of the Continental Divide, which means that streams may be full in June and July but the overall volume of water for the spring runoff season might still be near to below normal.