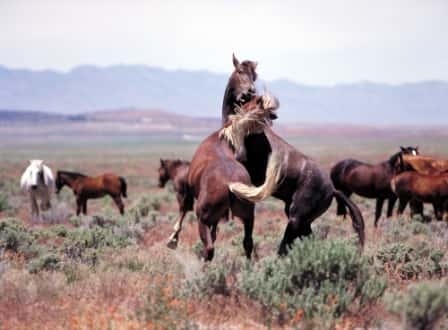 SALT LAKE CITY (AP) — State wildlife officials are supporting Utah ranchers and county leaders who are threatening to break federal law and round up wild horses this summer if federal officials don’t do it first.

The ranchers say a swelling feral horse population is edging cattle and elk out of drought-plagued southern and central Utah pastures.

Utah Wildlife Board members, at a meeting in Salt Lake City on Thursday, voted unanimously to send a letter to Interior Secretary Sally Jewell and U.S. Bureau of Land Management state director Juan Palma urging a reduction in the number of horses on the range.

The letter is the latest form of public pressure on the BLM. Earlier this week, a group of 13 ranchers filed a lawsuit in federal court alleging that the BLM is not doing its job to protect wildlife and cattle. Utah Gov. Gary Herbert declared last week that local entities should be allowed to manage the horse herds because the BLM has not.

“It’s a sad situation in the southwest desert,” said board member John Bair, one of about a dozen on Thursday who said the feral animals are hogging food and spring water, trampling soil and clearing the way for invasive species.

“Horses have been a problem for several years,” said Byron Bateman of Utah Sportsmen for Fish and Wildlife. “This drought really brought that to the forefront.”

Utah officials working for the Bureau of Land Management are heeding the ranchers’ threat. They want to gather hundreds of horses, they say, but are awaiting approval from officials in Washington, D.C. The Utah office says it is expediting the necessary pre-roundup environmental surveys.

“We certainly recognize the need to act with some bounce in our step,” said Utah BLM spokeswoman Megan Crandall. But, she said, “there’s so much that feeds into this, it’s not a simple situation.”

The office faces crunches in both budget and personnel, Crandall said, and it is simply running out of room for the extra horses after corrals in Utah and other states have filled.

According to the BLM, Utah is home to 3,245 wild horses and burros, well above the “appropriate management level” of 1,956.

Horse advocates say the situation is not as dire as it’s being painted.

Suzanne Roy, spokeswoman for the American Wild Horse Preservation Campaign, said the ranchers and their allies are overblowing a small situation in an attempt to “scapegoat” wild horses and divert attention from cattle overrunning the ranges. Breaking the law to do the roundups would not only be illegal, but counterproductive, she said.

“This is a lot of saber-rattling by the ranchers over a very small number of wild horses in Utah on a very small amount of land,” Roy said. “They are using bullying tactics to threaten the BLM.

Commissioners in Iron and Beaver counties warn they’ll help ranchers round up the horses after foaling season ends in July, if federal officials do not begin to do so at the season’s end. The counties and the BLM in April set up water traps to corral some wild horses on private property, but recent rains thwarted the trap.

“These populations have just exploded,” said Iron County commissioner Dave Miller, who estimates there are nearly 2,000 wild horses in his county, well above the BLM-determined safe level of 300.

Federal law stipulates that only the BLM may capture a wild horse, and Congressional action bars euthanizing or slaughtering them.

But counties considering roundups cite a new state law that they say allows them to intervene when public health or safety is concerned.

Some on Thursday complained the BLM is asking ranchers, such as embattled Nevada rancher Cliven Bundy, to cut back livestock grazing but has done little to scale back Utah’s swelling wild horse population. Ranchers say cutting grazing would threaten their livelihoods, draining counties of millions of dollars.

Bundy has been backed by self-described militia members in the grazing rights battle that led to a tense April 12 standoff beneath a highway overpass. The BLM says Bundy owes $1.1 million in unpaid grazing fees and penalties, while Bundy contends he has vested interest in the land.

Roughly 1/3 of Farm Operators are Female