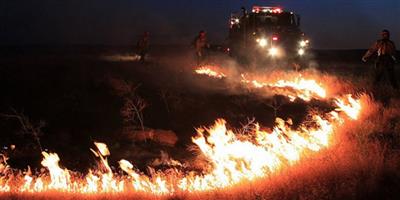 “There is a big double standard being applied in these government land agencies,” said Stockgrowers President Bill Kluck. “We cannot support the use of terrorism laws against a family ranch while forest service staff are just allowed to go about their day. We’re not questioning who set these fires, but we’re very worried about how the law is being used.”

In the letter, President of the Association, Bill Kluck stated, “The kind of unchecked decision-making authority and lack of accountability from federal land management agencies as seen in the Pautre Fire, can and will be applied to other situations and likely at the expense of independent livestock producers and private property owners.”

SD Stockgrowers drew comparison to current satiation in Oregon where a father and son have been sentenced to 5 years in federal prison after a prescribed burn on their private property burned less than 140 acres of federal property. The family is required to pay $400,000 in damages and was prosecuted under the Antiterrorism and Effective Death Penalty Act of 1996, which carries a minimum 5-year sentence.

“SD Stockgrowers Association supports full compensation to the ranchers who were harmed by the Pautre Fire, and believe that liability should be applied to the U.S. Forest Service the way the Hammond’s were held liable for setting that fire.”

“South Dakota Stockgrowers Association is very concerned about the lack of accountability and responsibility being applied to federal agencies in one case while private individuals are held to a much higher, and completely different level of responsibility in the other,” said Kluck.

“We are asking that our congressional delegates, the South Dakota Attorney General and U.S. Attorney’s office take a look at these cases to see how we can correct this injustice to the Hammond family and use their case to make sure that our South Dakota ranchers are able to hold the Forest Service accountable and liable for their actions on the Pautre Fire.”

Antlers in the Snow