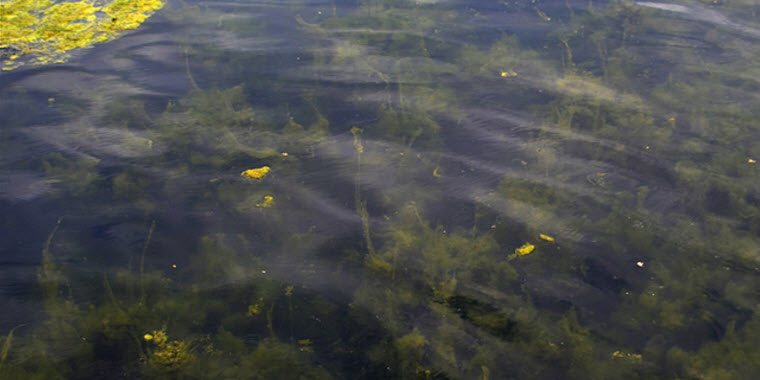 A new peer-reviewed study shows that widespread use of algae in animal feed could help limit the rise in global temperature to 2 degrees Celsius by 2100 and possibly even turn back the clock, bringing atmospheric carbon concentrations down to preindustrial levels by the end of the century.

The analysis, “New feed sources key to ambitious climate targets,” published in the December 2015 issue of Carbon Balance and Management, details how the cultivation of algae for feed could free up millions of acres currently used to produce pasture and feed crops, reducing the tension that exists between food security and bioenergy crops. When combined with a modest application of carbon capture and sequestration (CCS) this approach can lead to dramatic reductions in atmospheric carbon.

“This remarkable report shows that algae cultivation can play an outsized role in limiting greenhouse gas concentrations to levels that can avert the worst consequences of global warming, while also meeting the challenge of sustainably feeding a growing world population,” says Matt Carr, Executive Director of the Algae Biomass Organization (algaebiomass.org). “Algae's ability to consume waste CO2 from power plants, grow prolifically in waste or salt water and provide protein and oils makes it an incredible resource. This report is a strong case for increased investment in algae technology.”

The findings show that algaculture adopted at any scale would have a direct effect on greenhouse gas emissions and that its promise exceeds that of other biomass solutions, which not only face competition for arable land, but could affect land that is currently acting as a carbon sink.

“On large scales, this establishes the conditions for cascading greenhouse emissions savings and a return to preindustrial atmospheric carbon concentrations,” according to the study. “Though previously thought unattainable, carbon sinks and climate change mitigation of this magnitude are well within the bounds of technological feasibility.”

Algae-based feeds have been proven to be equal to or better than other feedstocks in nutritional value and digestibility, and could free large swaths of arable land and simultaneously address food security issues in an era of rising demand for animal proteins. Research has already shown that algae can be used as a highly effective component of animal feed, and can be produced with much smaller land and water inputs.

The authors recognize the complexity of changes to the global agricultural system, but emphasize the feasibility of their proposed solution, concluding with a call for greater attention to be focused to the algae industry. Based on feasible costs, the authors estimate that algae could have supplied 40{f75e9bc95454961d27ea60375533d5bd3793c6b31aa68057771d9b5363a8de8e} of global feedstock in 2013 for between $420-920 billion USD (2013), highlighting as a comparison the $550 billion USD (2013) given in fossil fuel subsidies that year.

This study comes at a critical juncture in climate change mitigation discussions, with an emphasis placed at COP21 in Paris on net greenhouse gas neutrality and the importance of carbon sinks.