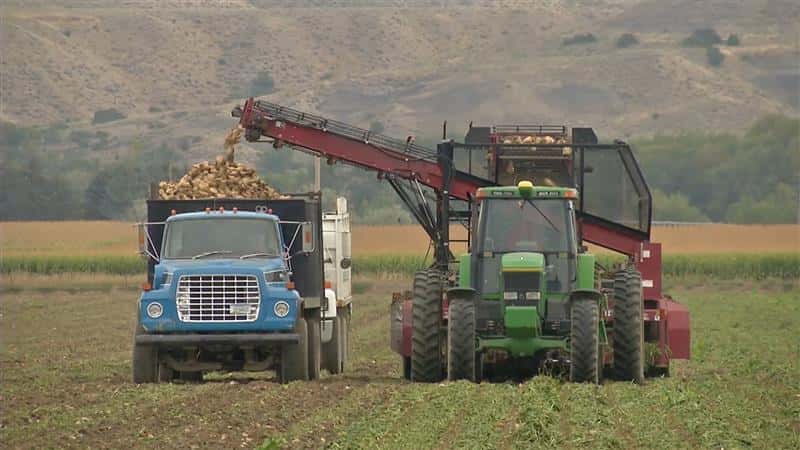 In Montana and northern Wyomng, the sugarbeet industry continues to be a very important driver for local economies. And the early sugarbeet harvest is underway for both Western Sugar Cooperative and Sidney Sugars growers.

“Economics of the sugarbeet business have been very good for all my life” said Ervin Schlemmer, a sugarbeet farmer from Joliet, MT. “Sugarbeets have been the mortgage lifter on a lot of farms. We’ve had some tough times; but we’ve also had some very good times.”

For Western Sugar Cooperative grower Schlemmer, this year marks his 46th sugarbeet harvest. He says even with the ups and downs of the industry, harvest is still one of his favorite times of the year.

“I love digging sugarbeets and I love the smell of sugarbeets” said Schlemmer. “It’s one of those businesses where we raise a lot of other crops too but the sugarbeet business is kind of in my blood. I’ve been involved with the politics of sugar and I know it from one end to the other.”

He says this year’s crop will probably average in the low 30’s as for tonnage per acre; a little bit less than what Western Sugar is projecting as a whole in Montana and Wyoming. He attributes severe weather as the culprit.

“It’s a good average crop this year; at least in the Clarks Fork Valley” said Schlemmer. “I think some areas that didn’t receive hail have an excellent crop. Like I said, it’s not going to be as good as a crop as last year or even the year before; but it’s looks like we’re going to be happy with it.”

“Right now, the crop is looking good” said Peters. “We anticipate a ton at the end of the year of 32.5 tons per acre.  We just ran our first sugars test and it came back 17.3 percent. Which is about .6 to .7 above the average. So, we’re very happy to see sugar content this high for this time of the year.”

Schlemmer says when sugarbeet growers have a good year, so does Montana’s overall economy.

“In Montana a lone it’s a $50 million business that’s put into our local economies, our small towns and our downtown businesses” said Schlemmer. “It doesn’t matter if you’re the co-op or the grocery store, the sugarbeet business is what helps feed this valley.”

This year’s full sugarbeet harvest for both Western Sugar Cooperative and Sidney Sugars will begin the first week of October.