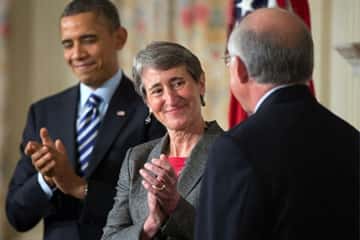 Taking Some Antiquities Act Power Away

Under the Antiquities Act of 1906 – as interpreted today – the President has the unfettered authority to make “national monument” designations. The Ensuring Public Involvement in the Creation of National Monuments Act would amend the Antiquities Act to require potential monument designations of five-thousand acres or more are given full review under the National Environmental Policy Act. Those reviews include in-depth analysis of the impacts of a proposed action – as well as the opportunity for local government and public involvement in the decision-making process.

PLC President Brice Lee says the legislation will prevent rash, oversized national monument designations that impose new regulations and restrictions on multiple uses such as livestock grazing. NCBA President Bob McCan says grazing encourages healthy plant growth, cuts down on fuel loads that lead to catastrophic wildfires and supplies water sources to wildlife. He says keeping ranchers in business is good policy for conservation of both private and public land. McCan says the measure approved by the House will promote greater stability for the livestock industry.

PLC and NCBA also note that the bill would allow a President no more than one monument designation per state, per term. While it would not require NEPA review for designations smaller than five-thousand acres – it would place a three-year expiration date on those designations unless the designation is approved by Congress. Additionally – it would require any monument designation to be followed by a study estimating long-term management costs and potential loss in federal and state revenue. Finally – it would not allow monuments to include private property without the informed written consent of the affected private property owner.