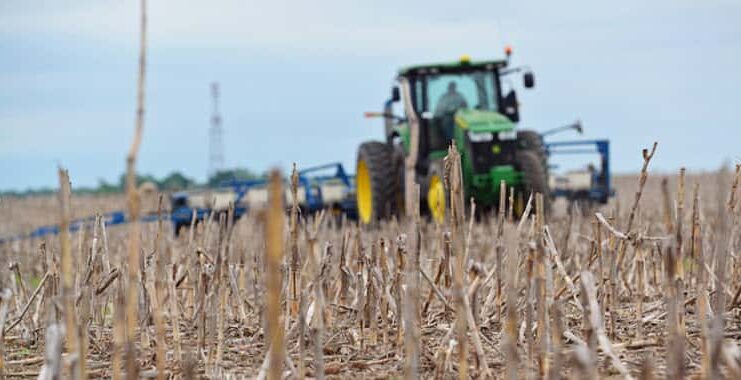 “Farmers and Ranchers might not have historically called it sequestering,” Clain Jones, Montana State University Extension Soil Fertility Specialist, explained, “it’s a newer term to combat climate change but they’ve been thinking ‘how do I build my soil organic matter?’ It turns out the two are synonymous.”

The Biden Administration has made it clear it wants to battle climate change, and agriculture looks to be the starting point. The U.S. Department of Agriculture (USDA) has already expressed interest in creating a carbon program for producers to participate. How do we start? What are the benefits? Can agricultural producers get paid to capture carbon in their soils?

In a soil fertility specialist’s world, sequester or sequestration means to take out. The goal is to take carbon out of the air and fix it in our soils permanently. Carbon makes up about half of soil organic matter, the dark dirt that is easy for roots to grow in and gives the soil structure to hold water and supply nutrients to the plant.

Jay Norton, University of Wyoming Extension Soil Specialist, points out that soils in Northern Ag Network territory and the West have low soil organic matter content. The cause may be from intensive farming practices long ago or over grazing where the soils were exposed with no cover to keep carbon and nutrients held in. Norton measured the amount of soil organic matter in native prairie soils, undisturbed ground in Wyoming, was fairly low also, around two or three percent but as high as five percent. This is dependent on rain fall, soil type and plant production.

According to Norton, the Earth’s soil has the ability to store three times as much carbon than the atmosphere. He noted that if we can increase the amount of carbon in degraded ag soils by a fraction of a percent, it could go a long way in offsetting human caused greenhouse-gas emissions.

How do we sequester carbon?

There are a number of ways to increase the soil organic matter in pastures and fields. Many farmers have switched to no-till faming. Another practice is recropping, planting a crop in the field every year whether that be the same crop or a rotation. Jones said this leaves cover for the soil to retain nutrients from the previous crop and doesn’t disturb the soil as much, eliminating major erosion whether in a major rain event or from wind in a drought. Cover crops, instead of fallow, are another option for leaving behind residue. In addition, perennial crops sequester more carbon than annual crops because they leave more residue, especially in their roots. Ranchers can change grazing practices to leave more cover resulting in more carbon in the soil. Norton added if producers follow the Natural Resources Conservation Service soil health principles, they can achieve better soil organic matter levels in their land.

Management practices to increase carbon in the soil becomes a little trickier when it comes to USDA developing a carbon bank program or carbon credit program and private companies paying producers for stored carbon. The difficulty is measuring carbon in our soils. In a lab carbon is measured through combustion, burning the soil. The sand, silt, and clay doesn’t burn but Jones said the organic matter combusts and escapes. The measurement can be done indirectly by seeing how much weight is lost after combustion or measure the amount of carbon dioxide that comes off the burned sample.

“All soil will have some level of organic matter,” Jones explained. “In Montana, those range from 1.5% to as high as 15%, with those higher amounts often in a garden soil that has been applied with a lot of manure or manure- compost.”

The markets that pay producers for stored carbon typically go by tons of carbon per acre. That ton of carbon has a certain price. The idea is to grow that tonnage over a period of time. Jones and Norton point to measuring this as the next challenge, in part because carbon is highly variable in the soil and also because carbon levels change slowly.

“Instead of this one size fits all idea, each agroecosystem situation has a different potential for sequestering carbon,” Norton said. “The soil organic matter in a native prairie compared to a long-term wheat-fallow system has different potential. The important thing about carbon markets, to me, is finding ways to measure increases that reflect what is really being sequestered.”

There are all kind of benefits to carbon sequestration from a producer’s standpoint. Increasing water supply to plants, nutrient supply to plants, the ability of the soil to hold and release nutrients, and removing carbon from the atmosphere. This can be achieved through no-till farming practices, cover crops, recrop, perennials, and grazing practices that leave a cover on our soils.

“As a soil fertility guy,” Jones explained, “regardless of how much (carbon) you take out of the air, what you put into the soil will be a benefit to your soil, to your crop, to your animals, and to you, eventually.”

Norton said, “When it comes to climate change mitigation by carbon sequestration in the soil, it’s really a win-win for the people doing it because they get better production. We’re going to see more farmers and ranchers more motivated to do what they know are good practices.”