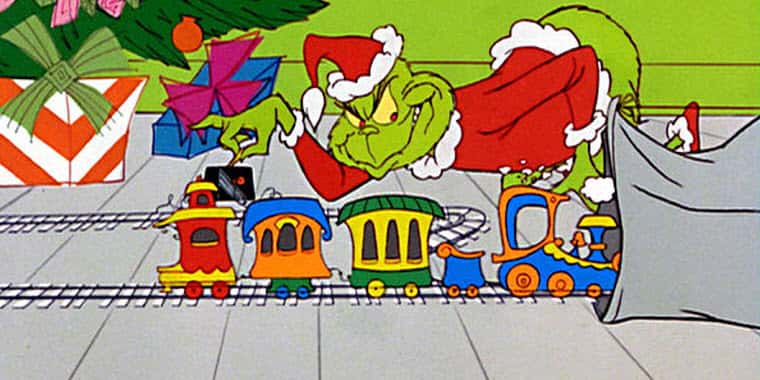 The Grinch Who Stole the Cattle Market?

December 18, 2014
If producers and traders had been listening on the first day of December (and known what to be listening for), they might have heard the party-pooping Grinch growling from his high mountain cave, plotting market mayhem and chaos. Defying the rock solid price trends in place through 92{28d451f77a4de8a52cd2586be6cc1800527fe70ea84e8b3f90098495d088e086} of 2014, the ambushed market of the last three weeks has simply come unglued.

When Dr. Seuss introduced his classic Christmas grump in 1957, it was destined to become the most iconic symbol of seasonal misery and scorn since Ebenezer Scrooge himself. Indeed, with “all the tender sweetness of a seasick crocodile,” you certainly are a mean one, Mr. Grinch.

I don't know how you deck the halls around your place, but it's not Christmas at the Harrington Ranch until we watch either Chuck Jones's animated adaptation (my personal favorite) or Jim Carrey's unique rendering. Our spirits soar each time the indomitable citizens of Whoville expose the green monster's undersized heart and distorted vision of what the season really means.

Yet after decades of analyzing this villain's evil intentions, I'm still not sure what makes him kick his dog each morning or vomit at the sight of happiness. Granted, we were all forewarned by Seuss regarding the Grinch's inscrutable grouchiness:

Now, please don't ask why. No one quite knows the reason.

“It could be, perhaps, that his shoes were too tight.

It could be his head wasn't screwed on just right.”

Come to think of it, understanding the Grinch's hostile motivation is as difficult as explaining why this year's great bull market in cattle has suddenly imploded in December, collapsing like a house of cards in an earthquake. No one who's been watching the extreme price debacle of the last three weeks can say that such a comparison is altogether fanciful.

Feedlot managers and ranchers were living in a bullish dream world through Thanksgiving, making more money on a per-head basis than ever recorded in cattle market history. The surging flood of equity in the first 11 months of 2014 would have even made the generous and good-natured Whos more than a little jealous.

Over the same time period, the feeder cattle trade proved to be even more breathtaking. Yearling steer types (i.e., 700-800 pounds) began the frothy year by averaging $166 in January basis Oklahoma City, 13{28d451f77a4de8a52cd2586be6cc1800527fe70ea84e8b3f90098495d088e086} above the previous year. Spurred by the culmination of smaller calf crops, outstanding feedlot profits, and increased heifer retention, the feeder market became an atomic escalator that at times seemed to be trapped in a dangerous state of runaway.

With bank statements stemming from such fancy prices, what well-heeled beef producers rising from thankful prayer late last month wouldn't feel optimistic about the potential of late-year holiday fun? A major shift in short-term supplies seemed all but impossible. And as far as demand was concerned, excellent beef spending over the lion's share of 2014 seemed to make fears of sticker shock just silly.

And by the way, the price of gas looks headed under $2, making even more room in consumer budgets for decent meat spending.

In the words of Cindy Lou from Whoville, “What could possibly go wrong?'

If producers and traders had been listening on the first day of December (and known what to be listening for), they might have heard the party-pooping Grinch growling from his high mountain cave, plotting market mayhem and chaos. Defying the rock solid price trends in place through 92{28d451f77a4de8a52cd2586be6cc1800527fe70ea84e8b3f90098495d088e086} of 2014, the ambushed market of the last three weeks has simply come unglued.

Save your e-mails and tweets. I know many of you find my reference to the Grinch as a completely unacceptable way to explain the December disaster. Why, you might say, it's nothing but a clever but sad symbol, a cheap ornament for the Christmas tree suggesting little more than “I haven't got a clue.”

I sense a good part of the mass exodus by late-year cattle bulls involves beef demand worries that have been boiling under the surface for a long time. Although we managed to dodge the bullet of sticker shock for more than three quarters, the understandable fear that even beef-loving consumers would eventually cry “No mas!” proved impossible to shake.

So when retailers and food managers returned from Thanksgiving unwilling to follow the traditional pattern of restocking with red meat, this long-simmering demand worry suddenly went viral.

Finally, the huge downward swing in oil prices seen over the last 30 days or so has been quite disruptive in investment dollars and general commodity strategizing. I think confidence in global demand per se for 2015 has taken a real hit this quarter, at least one implication of which questions the demand for U.S. meat exports.

Feel better? Probably not. I certainly don't think the sum of all those necessarily explains the late-year cattle market mess. So I guess we're back to ratting out the Grinch.

At least in the end of that story, the rehabilitated spoiler eventually comes clean.

Ag a Winner in Cuba Diplomacy