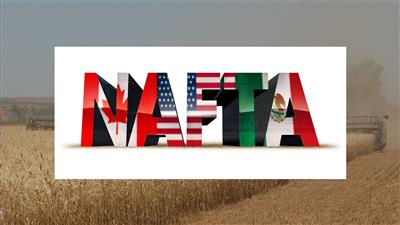 The United States' ongoing disputes with key trading partners has grabbed many headlines over the past year but what does that mean for Montana's largest industry?

“The numbers speak for themselves, the amount that we export out of this state,” said Michelle Erickson-Jones, Broadview resident and the president of the Montana Grain Growers Association. “We don’t have enough people and we don’t have enough demand to use all of our products domestically and so we have to maintain our export markets.”

“Eighty percent of the wheat raised on this farm leaves this country,” she said. “It’s an important thing to keep in mind when you pass fields in Montana or the stockyards in Montana, that a lot of the stuff is bound for export.”

As the NAFTA renegotiations near completion, she said U.S. wheat growers are hoping to see changes made to some of the technical barriers regarding trade with Canada.

“U.S. producers can’t take wheat into Canada and get anything higher than a feed grade regardless of the quality of the wheat,” Erickson-Jones said. “That was a technical barrier to trade that really violated the original NAFTA agreement, but it’s something that we are hopeful to have fixed in this agreement.”

She added that they also want updates to some of the phytosanitary regulations to really make the agreement the gold standard for the future.

NAFTA, however, isn’t the only trade agreement that’s grabbing the attention of Montana farmers and ranchers. The growing tensions with China and how it could impact Montana beef exports have raised concerns as well.

“We raise the finest beef in the entire world and our beef is sought after around the world,” said Fred Wacker, Montana Stockgrowers Association 1st Vice President from Miles City. “The part that’s so great is we have some trading partners that take a lot of the cuts that we don’t consume here in the United States. So that’s an invaluable service as it’s up to $300 per carcass and that’s a big, high number.”

“I think we will overcome this. There’s nobody on the Chinese side or the United States side that have said we want to end negotiations or end this deal so we’re still moving forward,” Wacker said.

Regarding NAFTA, negotiations are expected to continue this coming week after a U.S. trade delegation returns from China.