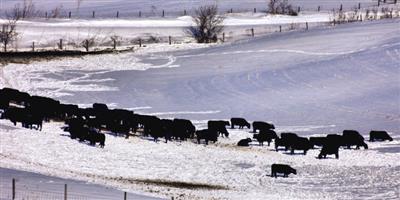 Trick Your Cows into Calving in Daylight Hours

Any producer wanting to have more cows and heifers calve in daylight hours should try to delay putting out hay and cubes until late in the day.

“This practice has been around since the 1970's thanks to work out of Canada. It may sound like an old wives tale but it works and has unbiased research behind it,” said Eldon Cole, a field livestock specialist with University of Missouri Extension.

According to Cole, there are numerous reasons producers like calves to be born in daylight hours.

First, the temperature in the winter should be warmer in the daytime so there is less of a chance of the calves chilling. Second, if assistance is needed it should be easier to find whether it is from a neighbor or a veterinarian. The third reason could be less sleepless nights for the owner or caretaker of the cows.

There are some problems if a producer has cattle on pasture where they can graze all day long. Some southwest Missouri cattle producers who strip-graze stockpiled fescue religiously can wait until late afternoon to move the fence to fresh pasture.

“The class of females that are of most need for daytime calving are first-calf heifers. If your management system allows your feeding time to be altered to very late afternoon, I would encourage you to try it,” said Cole.

Field studies and researchers all have seen daytime calvings move to around 80 percent plus when late in the day feeding is practiced.

Find more information and learn about some studies that have been completed by reading Early Evening Feeding for Daylight Calving and Feed at Night, Rancher's Delight. Then, if you end up trying it, let us all know how it goes.