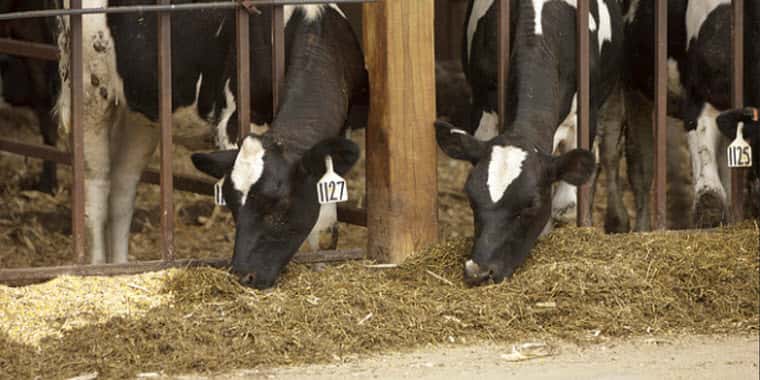 President Donald Trump found a trade nail sticking up when he was in Wisconsin earlier this week and now he is continuing to hammer on it.

In signing an executive order Thursday at the White House regarding an investigation into steel dumping by trading partners, Trump broke from his remarks about the steel issue to call out Canada for the second time this week on dairy trade.

“And I want to just add — I wasn’t going to do this — but I was in Wisconsin the other day, and I want to end and add by saying that Canada, what they've done to our dairy farm workers is a disgrace,” Trump said. “It's a disgrace. I spent time with some of the farmers in Wisconsin, and, as you know, rules, regulations, different things have changed. And our farmers in Wisconsin and New York State are being put out of business, our dairy farmers. And that also includes what’s happening along our northern border states with Canada, having to do with lumber and timber.

Trump reiterated that NAFTA is a disaster for the United States and he intends to show some action on NAFTA in the coming weeks, though the president did not indicate what kind of actions he may take. “And we’ll be reporting back sometime over the next two weeks as to NAFTA and what we’re going to do about it,” Trump said. “But what happened to our dairy farmers in Wisconsin and New York State — we’re not going to let it happen. We can’t let Canada or anybody else take advantage and do what they did to our workers and to our farmers. And again, I want to also just mention, included in there lumber, timber, and energy. So we’re going to have to get to the negotiating table with Canada very, very quickly. Again, just to tell you, this is another NAFTA disaster, and we’re not going to let it continue onward.”

National dairy groups and the state agricultural directors wrote Trump last week, making the point that Canada is violating its trade obligations under NAFTA. The argument, which has been escalating since last summer, stems from a new Canadian pricing policy for ultra-filtered milk that drives Canadian dairy processors to buy domestically. The U.S. dairy organizations state the pricing change in Canada is forcing U.S. dairy farmers to find new customers by May 1.

The dairy organizations asked the White House to address the following items:

-Contact Prime Minister Trudeau to request that this Class 7 program be halted and that ultra-filtered milk imports from the United States be restored.

-Direct U.S. agencies to examine the full range of tools that could be used immediately to impress upon Canada in a concrete way the importance of dependable two-way trade.

-Make opening Canadian dairy market access and addressing the chronic use of nontariff tools to thwart trade a key and early-stage priority in NAFTA discussions.

The problem with some of these topics is the U.S. still does not have an Agriculture secretary. Former Gov. Sonny Perdue could be confirmed as early as next Monday. The confirmation of Robert Lighthizer as the U.S. trade representative remains unresolved in the Senate and it will likely be longer before he comes up for a confirmation vote.

On the Canadian side of the line, the government continues to defend its dairy policies. Canadian Prime Minister Justin Trudeau was quoted by Bloomberg News on Thursday saying his country will stick with its dairy quota system.

“The U.S. has a $400 million dairy surplus with Canada so it’s not Canada that’s the challenge here,” Trudeau told Bloomberg on Thursday, adding many other countries subsidizes agriculture. “Let’s not pretend we’re in a global free market when it comes to agriculture.”

“Let's not pretend we are in a global free market when it comes to agriculture. Every country protects for good reasons its agricultural industries,” Trudeau said at Toronto event hosted by Bloomberg. He noted the US is running a trade surplus with Canada on dairy, “so Canada is not the challenge here.” He said Canada's supply-management system — where prices for dairy are set based on production costs, and foreign competition is hit with tariffs — works “very well” for the country, and was willing to talk about improvements U.S. once NAFTA discussions commence.

As the Weather Warms Up So Does the Branding Iron