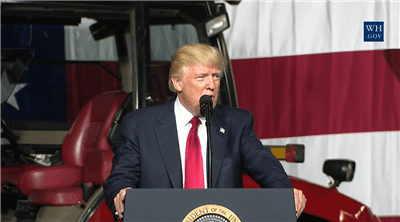 President Donald Trump pledged to include rural broadband in his infrastructure plan while in Iowa Wednesday. The President visited Kirkwood University in Cedar Rapids, Iowa to talk agricultural technology, and held a rally in downtown Cedar Rapids.

Trump was joined by Agriculture Secretary Sonny Perdue and Commerce Secretary Wilbur Ross while highlighting the need to expand rural broadband to give farmers access to new tools, according to Politico. The President promised rural broadband expansion in his $1 trillion dollar infrastructure package that is soon to be released.

The event was also a sendoff for former Iowa Governor Terry Branstad, now U.S. Ambassador to China, as he heads for Beijing following his confirmation vote by the Senate last month. Bill Northey, who is reported to be Perdue's pick for a key Department of Agriculture undersecretary post, also attended the events. Northey currently serves as Iowa's Secretary of Agriculture.

The White House provided the full remarks from the Iowa event.

Electronic Log Devices- The Death of Capitalism has Finally Occurred