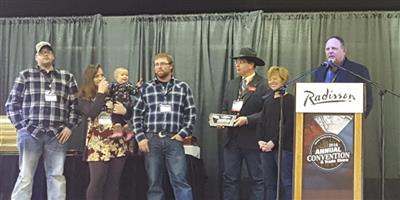 The Two Creek Monture Ranch, from Ovando, Montana, has been recognized as the 2017 Montana Environmental Stewardship Award winners.

Like the old 4-H motto, the ranch team is focused on “making the best better.”

“That, to me, is that it means to be a good steward,” Karalee said. “It’s keeping up with new ideas for improving all of these things.”

The Slaghts manage about 21,000 acres – half deeded and half leased – for owners Ralph and Toone Burchenal on the southern edge of the complex and greatly celebrated Crown of the Continent ecosystem in western Montana. It’s arguably one of the last “best” places in the lower 48, yet the Burchenal and Slaght continue to work to make it even better for future generations with decades of conservation and stewardship behind them and still ahead.

Greg Neudecker, with the Montana Partners for Fish and Wildlife Program, has worked with the Slaght family for more than 25 years and recommended the ranch for the award.

“Right now, we have all the critters that were here 200 years ago when Merriweather Lewis came through here. So from a working lands perspective, we don’t have anything else like that in the lower 48 states and very few places in the world – so it’s a very, very special place,” Neudecker said. “It has old growth forests, incredible aspen stands, riparian areas, native bunch grass prairies, glaciated pothole wetlands – it’s got everything, and that’s due in large part to their stewardship.”

Of course, the ranch team’s main focus is the cattle. About 900 make their home on the commercial cow-calf ranch, and they not only co-exist, but play an important part in improving the landscape. Wayne was raised on the neighboring Monture Ranch, where his father worked and managed for most of his ranching career, too. Wayne had been managing the Montour Ranch for more than 15 years when the Burchenals purchased and added it to the Two Creek Ranch, where Wayne, son Ben and brother-in-law Ken Kovatch now manage and work together on private, state and federal land.

“It’s so important to prove – especially to the Fish & Wildlife guys – that cattle are a useful tool for the land,” Wayne said. “They do co-exist with wildlife, which is quite proven on this ranch.”

They’ve been able to grow the cattle herd over the years by not only making their deeded land more productive, but by fostering relationships that have led to new and continued leased grazing opportunities on neighboring state and federal lands. They work to improve owned and leased land alike with strategic rotational grazing, water development and riparian restoration projects.

“We realized we needed to work with all these federal and state agencies – we have to be on the same page,” Wayne said. “We’re here to partner with those folks to help manage the entire landscape. It we weren’t here and they were subdividing us and turning this into houses, we’ve all realized we’d all be in trouble.”

Managing a landscape full of endangered or threatened species – including grizzly bears, wolves and bull trout – plus abundant elk, deer, Sandhill cranes, turkeys and trumpeter swans, requires planning, innovation and a lot of collaboration in order to stay in business and balance a healthy ecosystem.

The ranch played a key role in the rehabilitation of bull trout redds (spawning sites) on Montour Creek over the past 30 years, and continue to seek new ways to develop water that will enhance their grazing rotation and conserve riparian areas and in-stream flow for fisheries.

“Obviously, balancing the needs of fish and wildlife with the agricultural operation has its challenges in the modern world,” Ron Pierce, Montana Fish, Wildlife and Parks fisheries biologist wrote in his letter of recommendation. “With these challenges in mind, the Two Creek Ranch has been a progressive leader with the ranching/conservation community of the Blackfoot Valley.”

That leadership extends beyond the ranching community, too. Wayne’s been a 4-H leader for nearly 40 years, served on local school boards, the volunteer fire department, coached grade school basketball and more, while frequently hosting local, state, national and international tour groups on the ranch to share conservation efforts and ideas.

“They’re not only a voice of reason, they’re a practice of reason that’s really, really good for our industry,” neighboring rancher David Mannix said. “Wayne’s an early adapter. He has the courage to implement some of these things, and then he also has courage to share failures or challenges so the next neighbor can do it a little better and the third guy can do it a little bit better still.”

Like his father and ranching mentors before him, Wayne’s focus on making the ‘best, better,’ is geared toward leaving the land and leadership of the industry in better shape with the next generation. Ben came back to the ranch full-time in 2008 after earning a business degree from the University of Montana Western.

“I’d love to stay here and keep working to improve the ranch every day,” Ben said. “We’ve just got to keep doing our homework and looking around us to see what’s changing, what’s next. We’re always learning. We’re constantly learning more about trees, about grass, about water – learning to increase what we can do with those resources. You’re constantly learning, constantly changing and keeping an open mind to the fact that we don’t know everything – you can always learn more from somebody else.”

·         Improved management on more than 15 riparian miles on four different creeks on the ranch, each which support valuable fisheries and water sources for livestock and wildlife.

·         Entered more than 5,000 acres of valuable grasslands, wetlands, riparian and timberland in to conservation easements to permanently steward those lands through the generations.

·         Restored previously degraded instream habitat on more than 2 miles of streams on the ranch, while maintaining ranch water use and increasing production and irrigation efficiencies.

·         Played a critical role in returning the final missing species Merriweather Lewis noted in the Blackfoot Valley 200 years ago. Ranch owners Ralph and Toone Burchenal made the initial financial donation to the Trumpeter Swan Restoration Project, and the ranch ushered the first breeding pair onto a restored wetland. Today, more than 10 pairs of Trumpeter Swans are established in the Blackfoot Valley.

·         Developed riparian grazing plans and cooperative agreements to bring Federally Threatened bull trout spawning sites on Monture Creek from a low of eight redds in 1989 to a high of 92 redds, averaging 50 redds annually over the course of the past 30 years.

·         Five years after their first calf was killed in 1998, Montana Fish, Wildlife and Parks documented 77 agriculturally-related grizzly bear/human conflicts in the valley. Over the past ten years, thanks to management efforts and best practices by ranches like the Two Creek Monture Ranch and collaboration with cooperating agencies, conflicts have averaged around 12 per year, while the grizzly population has been increasing by 3 percent each year.

·         Improved the forage capacity of one pasture by four times in one year with an aggressive noxious weed control program.