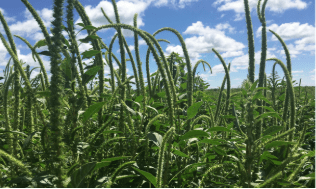 “Noxious weeds cause millions of dollars in damage to North Dakota crops and forage, and many additional dollars are spent in both public and private efforts to control these weeds,” Agriculture Commissioner Doug Goehring said. “In addition to their agronomic impact, noxious weeds adversely affect rural and urban landscapes, tax revenues, recreational opportunities and wildlife habitat.”

Palmer amaranth may spread through multiple channels, including: contaminated seed mixes; equipment and machinery movement; animal feed and bedding; and wild birds. It is a prolific seed producer that can emerge throughout the growing season. Houndstongue is spread when its bur-like seeds are picked up by animals or people moving through infested areas. The infestations are most often found near wooded and riparian areas, making it difficult to control. Houndstongue is toxic to livestock if ingested.

The public is urged to work with local weed officers, extension agents and other experts to identify and report suspect plants.

More information on these and other noxious and invasive weed is available at www.nd.gov.