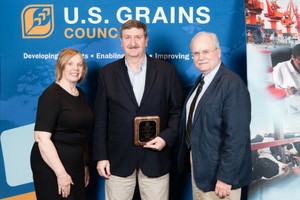 Brewers and farmers share a common interest – the love of high-quality barley. And for Montana barley farmer Buzz Mattelin, the U.S. Grains Council (USGC) is the organization that brings these two very different groups together.

Mattelin serves as a delegate to the Council as part of the Montana Wheat and Barley Committee, thanks to the initial encouragement of past USGC Chairman Don Fast. He learned the full value of the Council’s work, however, after hosting trade teams on his farm and traveling abroad to help promote U.S. barley in Mexico and Latin America.

One of the first USGC trade teams Mattelin hosted on his farm in Culbertson, Montana, was a mix of Mexican beer brewers, ranging from representatives from some of the largest brewing companies in Mexico to niche craft brewers.

As part of that trade team, one of the Mexican craft brewers “fell in love with Montana barley,” according to Mattelin, and ended up not only buying barley from a malt house in Great Falls, Montana, but also becoming a distributor in Mexico for that same malt house. Mattelin explained successes like these are the result of exchanging information face-to-face on business practices, logistics and more.

“The main part is you build relationships,” Mattelin said. “You invite them into your home and you make them feel valued as a customer, which they are.”

The visit from another Mexico trade team, in the summer of 2017, reiterated the importance of trusted relationships in the context of trade policy. Members of that team attended an agricultural summit in Great Falls, to meet with U.S. Secretary of Agriculture Sonny Perdue and join with U.S. farmers in expressing their shared concerns with ongoing North American Free Trade Agreement (NAFTA) negotiations.

“They expressed nervousness about how they did not want to be collateral damage in the negotiations as well as how the agreement was working well for agriculture,” Mattelin said. “Free trade makes good neighbors. Mexico can make a great Corona, and we can supply the barley to make it. It’s a great relationship.”

The strong trading partnership between Mexico’s brewing industry and the U.S. barley industry exemplifies how the Council’s work has evolved to effectively promote barley to world markets. When barley growers helped form the Council, the crop was grown primarily as a feed grain. The barley industry underwent an evolution, and now barley is most often produced as a specialty crop, particularly for malt. Over the years, the Council has adjusted its promotional efforts to reach this new group of end users.

“I have gotten to know quite a few of the staff who work for us; they are great people who have taken the time to learn about malt barley and make contacts with the folks who are decision makers,” said Mattelin, who has served on the USGC Western Hemisphere Advisory Team (A-Team) to help guide these efforts.

The Council recognized Mattelin for five years of service during the organization’s 15th International Marketing Conference and 58th Annual Membership Meeting in Houston, Texas. Although he will soon finish his term on the Council’s Board of Delegates, the lessons he has learned through his interactions with fellow Council delegates, global staff and barley end-users throughout the Western Hemisphere will stay with him.

“Without trade, we do not have markets. And without markets, we do not have a price,” Mattelin said. “The small investment that farmers make through their checkoff dollars has a huge impact.”

Stocking Rate Reductions May be Needed