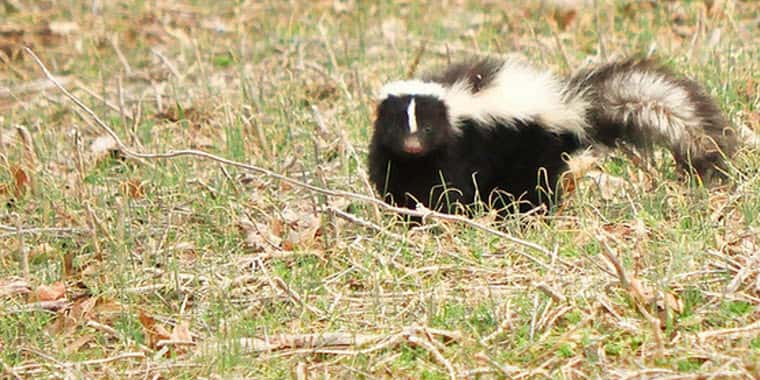 Helena, Mont. – On Monday September 14th, the Montana Department of Livestock (MDOL) reported the first case of terrestrial (non-bat) rabies in Missoula County in nearly 20 years. The rabies-infected animal was a skunk captured in the Harpers Bridge Road area of Missoula County on September 10th. A day earlier a resident of that area was bitten by a skunk but the skunk was not captured.   The next day, a neighbor captured a skunk after the animal had an encounter with his dogs and submitted it for testing.    Missoula County public health officials indicate that the bite victim has begun the rabies post exposure treatment and notification has been given to area residents. MDOL and Missoula City County Animal Control are working together on the management of exposed domestic animals. Animal Control is also attempting to trap and test other skunks in the area to help determine the extent of the problem.

Exposed animals include four privately owned dogs and one feral cat colony of 15 to 20 animals. Three of the four dogs were past due on rabies vaccination and will be placed under a six-month quarantine.

“A long quarantine period is inconvenient and can be expensive for the owner”, states Dr. Szymanski, assistant state veterinarian with the Department of Livestock. “In contrast, currently vaccinated animals only require a booster vaccination and a brief observation period.” Jim Carlson, Missoula County Environmental Health Director said, “This incident highlights the importance of keeping your pet’s rabies vaccinations up-to-date.”

The feral cat colony will be live trapped and euthanized because of the difficulty of managing and quarantining wild or feral populations exposed to rabies and the potential risk to human health and other animals if the spread of rabies is not controlled.

MDOL has placed Missoula County under a rabies quarantine following the diagnosis. Under Administrative Rule of Montana, counties are quarantined for 60 days following the diagnosis of rabies in a terrestrial animal. Dogs, cats, and ferrets must be current on rabies vaccination for a minimum of 28 days prior to travel outside of the county while the county is under quarantine. County health regulations require that all dogs, cats and ferrets three months of age or older be vaccinated against rabies and revaccinated at appropriate times.

Rabies is a fatal disease of mammals that is virtually 100{62211894bbe3543ea27fa51e74e3ab79f2baeee0f4cbac9ff4b15b5bf1d81fd0} preventable in domestic animals through the administration of rabies vaccine. A typical series for a dog or cat includes an initial three month vaccination, a one year vaccination with subsequent doses of vaccine every three years

Historically, rabies in western Montana is seen almost exclusively in bats.  The last documented case of terrestrial (non-bat) rabies west of the continental divide was a single skunk in Missoula County in November of 1996.