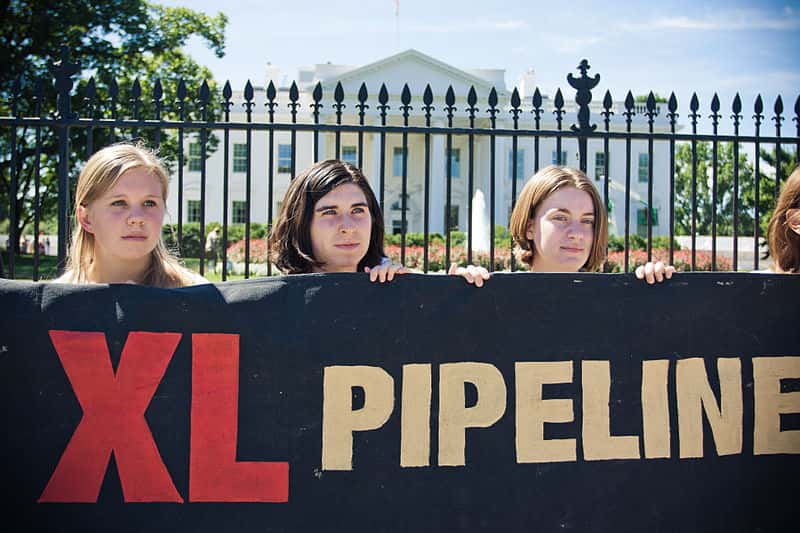 by Dina Cappiello and Josh Lederman

WASHINGTON (AP) — The Obama administration is putting off its decision on the Keystone XL oil pipeline, likely until after the November elections, by extending its review of the controversial project indefinitely.

In a surprise announcement Friday as Washington was winding down for Easter, the State Department said federal agencies will have more time to weigh in on the politically fraught decision — but declined to say how much longer. Officials said the decision will have to wait for the dust to settle in Nebraska, where a judge in February overturned a state law that allowed the pipeline's path through the state.

Nebraska's Supreme Court isn't expected to hear an appeal to that ruling until September or October, and there could be more legal maneuvering after the high court rules. So President Barack Obama will almost surely have until after the November congressional elections to make the final call about whether the pipeline carrying oil from Canada should be built.

Approving the pipeline before the election would rankle Obama's allies and donors in the environmental community, but nixing it could be politically damaging to vulnerable Democrats running this year in conservative-leaning areas.

“This decision is irresponsible, unnecessary and unacceptable,” said Democratic Sen. Mary Landrieu, who faces a difficult re-election in oil-rich Louisiana. Landrieu said Obama was signaling that a small minority can tie up the process in the courts, sacrificing 42,000 jobs and billions in economic activity.

In an ironic show of bipartisanship, Republicans joined Landrieu and other Democrats like Sen. Mark Begich of Alaska in immediately condemning the announcement — the latest in a string of delays in a review process that has dragged on for more than five years.

“This job-creating project has cleared every environmental hurdle and overwhelmingly passed the test of public opinion, yet it's been blocked for more than 2,000 days,” Boehner said in a statement.

But environmental groups fighting the pipeline hailed the delay, arguing that it shows the State Department is taking the arguments against the pipeline seriously.

“This is definitely great news,” said Tiernan Sittenfeld, senior vice president for the League of Conservation Voters. “We are very confident as they continue to examine the issues with the lack of legal route in Nebraska and the terrible climate impacts, at the end of the day the pipeline will be rejected.”

Keystone XL would carry oil from western Canada's tar sands to refineries on the Texas Gulf Coast. The project requires State Department approval because it crosses an international border. The State Department vowed to move forward with other aspects of its review even while the situation in Nebraska remains in limbo.

“The agency consultation process is not starting over,” the State Department said in a statement.

State Department officials said other U.S. agencies, such as the Environmental Protection Agency, won't be notified of their new deadline for comment until the legal situation in Nebraska becomes clearer. Driving the delay is a concern that the legal wrangling could lead to a change in the pipeline's route that would affect agencies' assessments, said the officials, who weren't authorized to comment by name and demanded anonymity.

The White House has insisted that Secretary of State John Kerry is in charge of the process, which involves a determination about whether the pipeline is in America's national interest. But Obama is widely expected to make the final call.

In a nod to environmentalists' concerns, Obama has said the pipeline will be deemed not in the U.S. interest if it contributes significantly to increasing carbon dioxide emissions that contribute to climate change. Environmentalists argue that the oil that's pulled out of Canada's tar sands is among the dirtiest on the planet.

The White House declined to comment on the State Department's announcement, which came on Friday afternoon, when many Americans were observing Good Friday. Sen. Lisa Murkowski, R-Alaska, accused the administration of “a stunning act of political cowardice” by waiting until most Americans would be too busy preparing for Easter or observing Passover to notice the delay.

Obama and environmental groups dispute the notion that the pipeline would create many permanent jobs or have a substantial economic impact, but Obama has refused to say whether he will nix it. The 1,179-mile pipeline would travel through Montana and South Dakota to a hub in Nebraska, where it would connect with existing pipelines to carry more than 800,000 barrels of crude oil a day to refineries in Texas.

This isn't the first time that machinations in Nebraska have delayed a Keystone XL decision. The pipeline's initial route had to be redrawn to address concerns that it would threaten the Nebraska Sandhills, a region of grass-covered dunes used as ranchland.

“We are disappointed that politics continue to delay a decision on Keystone XL,” said Jason MacDonald, a spokesman for Canadian Prime Minister Stephen Harper.

The pipeline project has become a proxy for a larger battle between environmental activists and energy advocates over climate change and the future of American energy — much to the dismay of Calgary-based TransCanada Corp., which has proposed the pipeline. The company's CEO, Russ Girling, said the company was “extremely disappointed and frustrated” with the latest delay.

Can Wal-Mart Make Organic Food Cheap for Everyone?