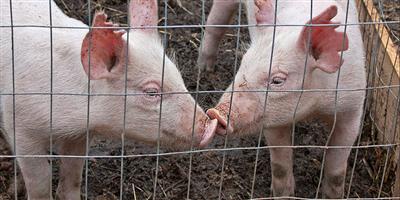 The agency's top suspect is contaminated flexible intermediate bulk containers (FIBC), it said in a report issued on Wednesday. The 1,000- to 3,000-pound reusable containers transport a wide variety of commodities including sand, soybeans, pet treats and feed.

APHIS investigated 17 possible causes of the viruses and found four that were possible.

FIBCs are the most plausible cause, APHIS said, because they are one of the only vehicles that could have carried the viruses through four segments of the journey to U.S. farms: contamination in the country of origin, entry into the U.S., dispersion to multiple locations, and exposure and infection to pigs.

“The FIBC scenario describes a mechanism for each segment of the journey, as well as explaining the apparent anomalous association of feed with the outbreaks,” the 53-page APHIS study stated (you can find the study here: http://1.usa.gov/…).

“The early case-control study provided significant association of feed to infected herds, and several investigations and consultants also pointed to feed as the source. At the same time, the investigations were unable to identify any ingredient or manufacturer that was common to all farms, which discounts the possibility of feed as a source. Because FIBCs are used for transporting many types of potentially contaminated product, initial contact with SECD viruses could come through various routes, and the reusable design allows transmission of virions from contaminated to clean products.”

APHIS conducted a set of follow-up tests on FIBCs and found that the viruses “could easily remain stable through the time needed to travel to the United States and infect pigs.”

USDA said it did not discover any undeniable proof that the viruses entered the country this way, but they found it to be the most plausible scenario.

Between April and August 2013, three novel swine viruses entered the country. USDA has not determined if they arrived together or separately, but believes they used the same mechanism.

The coronaviruses, including PEDv, are particularly deadly to piglets. During the peak of the PEDv outbreak, veterinary officials identified 40 to 50 new cases per week and the virus spread to at least 14 states.

The virus hit just as the market had hoped to start expanding. Instead, pigs per litter contracted.

“PEDv did have a huge impact on both hog production and overall market structures,” said DTN Analyst Rick Kment. “The impact of tighter hog supplies led to record hog prices through the spring and early summer of 2014. Spot month futures prices moved above $130 per hundredweight, nearly double the price level seen today.”

The brunt of the virus seems to have passed — producers have increased their biosecurity and herd immunity and USDA has authorized a vaccine — and the pork industry has largely overcome the PEDv tailwinds, said Purdue University agriculture economist Chris Hurt.

Producers have been disciplined following the following 2014 record profits, and as a result, pork supplies will be only modestly higher in 2016, Hurt said in a news release.