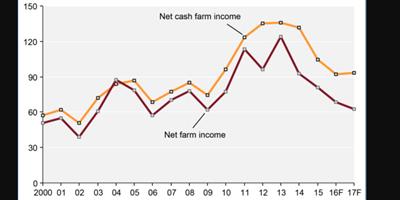 The numbers look worse when adjusted for inflation. When inflation is factored in, USDA stated net farm income in 2017 will be the lowest since 2002.

USDA noted the overall weakening condition for farmers when it comes to cash flow and working capital. “Financial liquidity measures, including working capital, are forecast to weaken in 2017, as are solvency measures such as the debt-to-asset ratio. The debt-to-asset measure is now above its average over the previous 10 years.”

More details can be found at https://www.ers.usda.gov/…

Chris Clayton can be reached at Chris.Clayton@dtn.com

Montana SB155 Would Provide for Consistent Regulation of Agricultural Seed