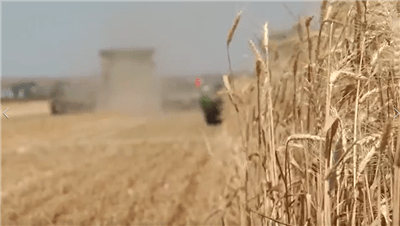 Researchers like Jay Norton, Soils Specialist at the University of Wyoming, hope a $340,000 grant to study the effects of compost on a number of factors in southeast Wyoming will also address a problem sprouting for organic wheat producers.

College of Agriculture and Natural Resources scientists will study water efficiency, soil and yields and intercropping strategies and is part of a larger $1.9 million award spread across Wyoming, Utah, Montana and Washington.

A possible change in how the USDA may designate organic wheat has some southeast Wyoming producers ill at ease.

Many Wyoming wheat producers had switched to organic for the additional price boost, but the USDA may no longer recognize the long-used practice of fallow as a rotation, said Jay Norton, soils specialist for UW Extension and one of the scientists on the UW grant.

Producers fallow, or rest, the soil and allow fields to soak up any moisture in their crop rotations, but the wheat-fallow system is known to accelerate erosion and loss of soil organic matter compared with systems that include more constant soil cover, noted Norton.

The USDA may require producers to reduce or eliminate fallow periods to retain organic certification.

“They have to do something else like incorporate cover crops or a more genuine crop rotation to reduce or even eliminate fallow,” said Norton. “They’re looking for options to diversify and incorporate soil building practices so they can remain certified.”

A dryland wheat session at this year’s High Plains Organic Conference in Cheyenne will take on this issue, said Norton. The conference is Feb. 27-28.

Straight wheat-fallow production doesn’t help build soil nutrients under an organic system, and Norton said whether or not an organic system is sustainable is one of the biggest questions needing answered.

“Farmers know wheat-fallow is their lowest-risk option for harvesting a crop every other year but also that it degrades soils. They’re very interested in evaluating options to improve their soils and stay organic certified,” said Norton. “They are anxious to be involved in this research.”

Wyoming has about 120,000 certified organic acres. About 77,000 acres are cropland and 46,000 pastureland/rangeland, according to the USDA.  Norton said six farmers have already provided letters of support and commitment. The Wyoming studies also will be at the university’s James C. Hageman Sustainable Agriculture Research and Extension Center (SAREC) near Lingle and in laboratories.

The research will look at wheat varieties, intercropping, and other practices.  But according to Rob Hellbaum, an organic wheat producer from near Chugwater, research at SAREC is valuable but lacks the modern equipment now used in dryland farming and doesn’t have the organic farming experience of area farmers.

He said many in the farming community hope many of the organic inputs available today are studied and evaluated at SAREC.

“The (inputs) tend to be very expensive, and actual results for our area are in question,” he said.

Norton noted that Hellbaum is always looking for ways to reduce soil disturbance and erosion.

“He’s developing and testing his own ideas about how to use cover crops and even perennials like alfalfa in longer-term rotations,” said Norton. “We’re hoping this new phase of our research will help us catch up with Rob and evaluate some the ideas he and other farmers are interested in.”

Hellbaum said half the wheat in Laramie County is organic, and said if not for organic wheat, the wheat industry “is done” in Platte County.

“This is no small deal,” he said. “People bought into organic because the organic prices still make it work and work well if you cut the wheat. Organic wheat in Wyoming is not a flash in the pan. It’s become a major deal. If they say we can’t get certified as an organic wheat producer, what are our options?”

Hellbaum said he, Norton and others have tried explaining the differences between dry southeast Wyoming, in the rain shadow of the Rocky Mountains, from other places that receive substantially more moisture.

“I’m not saying they are wrong, but you can’t paint the entire U.S. with one brush,” he said. “If talking sustainability and soil health, I think our fallow system is as good as anything else and has proven sustainable for over 100 years.”

While Wyoming is a leader in organic winter wheat, which is crucial to local communities, the state only produces a small portion of the national organic wheat crop.

“They honestly don’t care if Wyoming produces organic wheat or any wheat,” said Hellbaum. “We are just such a small player.”

Norton said farmers he has been working with have their own ideas about cover crops. The crops could be planted after harvest and killed early in the spring before using too much soil moisture. The cover crops would become part of the biomass, or compost.

There is a glaring problem.

“Study after study shows cover crops tend to decrease the yield of the following wheat crop during all but the wettest years because of the soil moisture they use,” said Norton. “We are trying to figure out ways to get around that.”

An alternative could be planting a cover crop in the fallow about the time of wheat harvest, then planting the wheat in the fall as usual but into the established cover crop. The cover crop would die in the winter, and the wheat would make use of nutrients released by the decomposing biomass in the spring.

Norton is also looking at planting every other row with a cover crop.

The Next Big Thing in the Sheep Industry

Why not plant for annual grazing in the fallow years then lease that out to custom grazers of multiple species? There is a lot of good work already being done with multi species/rotational grazing and improved soils.

No one should have ever been certified as organic with (bare) fallow as part of their cropping system. Organic standards require a crop rotation and that the tillage and cropping system "maintain or improve… soil organic matter." Fallowing, without incorporation of cover crops, absolutely degrades soil quality and depletes organic matter. It is unfair to those of us farming in compliance with the standards- and improving our soils- that others are allowed to use such backward and degrading practices. The continued allowance of fallow casts all organic farming in a bad light.
There are many options to use more diverse crop rotations and cover crops / green manures in drylands systems. The fact that a practice has been used for "100 years" does not make it either sustainable or in compliance with organic standards. Fallow and monoculture are largely responsible for the soils being so susceptible to drought. Years of (these) poor farming practices have degraded the soil and made it much less able to store moisture and sustain crops. Continuing the practice only makes it worse.