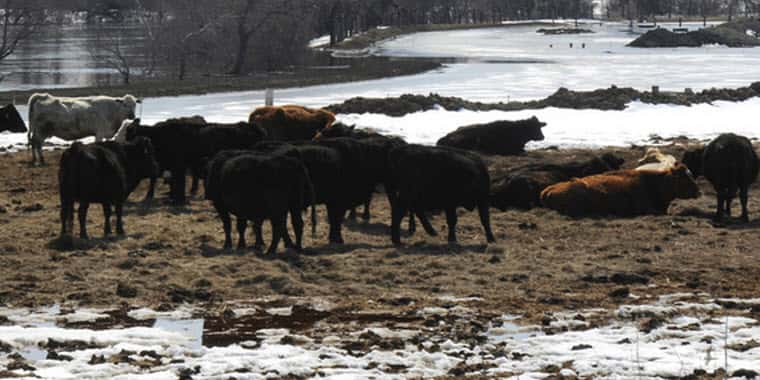 September 20, 2015
Billings, Mont. – After decades of depressed cattle prices that triggered the unprecedented liquidation of the U.S. cow herd that began in 1996, reports indicate that U.S. cow-calf producers are beginning to experience better times. The Chicago Mercantile Exchange (CME) Group, for example, reported that “cow-calf operators have enjoyed BY FAR their two best years ever in 2014 and 2015.” Annual data from the U.S. Department of Agriculture (USDA) show that while production costs have increased dramatically, causing full profitability to remain just out of reach, cow-calf producers nevertheless enjoyed their strongest year ever in 2014.
But R-CALF USA CEO Bill Bullard says Congress and the USDA are working hand-in-hand to put an end to the better economic times that U.S. cattle farmers and ranchers are now enjoying.
“In addition to Argentina and Brazil, USDA now adds the southern Africa country, Namibia, to its list of countries where U.S. meatpackers can soon access cheaper beef. Meanwhile, Congress is working to repeal our country of origin labeling law so all this imported beef will be undifferentiated in our U.S. market.
“These actions are certain to drastically reduce cattle prices for U.S. farmers and ranchers,” said Bullard.
The USDA is working aggressively to increase beef imports from around the globe in an effort to increase supplies and decrease cattle and beef prices. In June 2015, the agency issued final rules to allow fresh beef from Argentina and Brazil, countries the USDA acknowledges are not considered free of the highly infectious foot-and-mouth disease (FMD).
Nevertheless, those rules took effect in early September and imports of cheaper beef from Argentina and Brazil can begin as soon as the USDA Food Safety Inspection Service (FSIS) completes an equivalency review of those countries' slaughtering plants. The USDA stated in its rulemaking process that fresh beef imports from Argentina and Brazil would lower U.S. beef prices, lower U.S. beef production and reduce financial returns to producers in the U.S. livestock and beef sectors.
Today, the USDA issued a proposed rule to allow fresh beef from Namibia, a country in southern Africa. Foot-and-mouth disease is endemic in Africa, including in many parts of Namibia itself and in Botswana, which shares Namibia's eastern border. According to the agency's proposal, Namibia has repeatedly failed to demonstrate that its food safety systems were adequate to ensure the safety of beef imports from that country. Such repeated failures were identified in 2006, 2009 and again in 2013. Namibia is reported to have adequately addressed the FSIS' concerns in 2014, prompting the agency to issue its proposed rule.
Bullard said if either of Congress' bills to repeal country of origin labeling (COOL) is passed, then beef entering the U.S. from Argentina, Brazil and Africa will not have to bear a COOL label after the importer cuts and repackages the meat.
“Even the Hoeven/Stabenow bill that purports to establish a voluntary labeling regime has no provisions for labeling imported beef,” he said.
“The combination of USDA's efforts to allow risky beef from these foreign countries and Congress' effort to repeal COOL or to make it voluntary is a recipe for disaster for U.S. farmers and ranchers,” Bullard said.
The public can provide comments on the USDA's proposal to allow fresh beef imports from Namibia through November 17, 2015. To comment on the proposed rule, go to www.regulations.gov and enter “FSIS-2012-0028” in the search engine.

Bullard said his organization encourages producers and consumers alike to register their objections to the proposed rule and to call their entire congressional delegations to urge them to steadfastly defend mandatory COOL and stop USDA from allowing risky, unlabeled imports into the United States.

Northern Ag Network Note:  We are seeing comments that people are unable to find online portal for comments.  We couldn't either and will do some more research.  CLICK HERE for the link to the proposed rule.