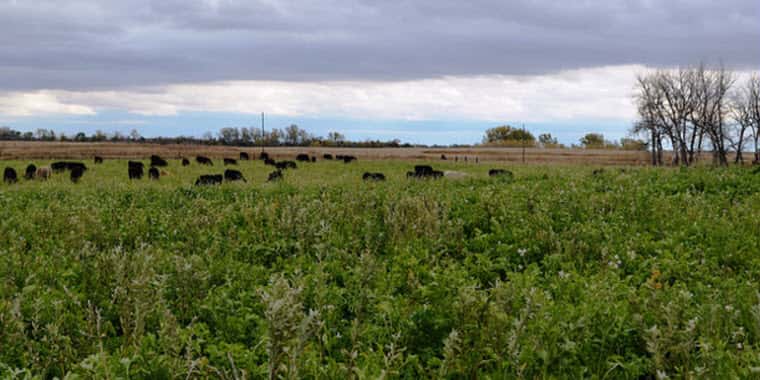 (DTN) – USDA will spend $1 billion on a series of partnerships to develop and promote “climate-smart commodities” through pilot projects meant to create new markets for agricultural and forestry products grown through practices that reduce greenhouse emissions and protect the soil.

The “Partnership for Climate Smart Commodities” will look for ways farmers and ranchers can market food and fiber projects that are tied to cost-effective practices to measure and verify lower greenhouse emissions or sequester carbon in the soil.

The set of pilot projects funded by the $1 billion will run from one to five years. The projects are expected to provide farmers, ranchers and forest owners both technical assistance and financial add to implement conservation practices on working lands and also develop a market because of those practices.

U.S. Agriculture Secretary Tom Vilsack announced the opening of applications for pilot projects under the partnership at Lincoln University in Jefferson City, Missouri, on Monday.

“We can, with this program, be part of the solution to climate change,” Vilsack said. “In fact, I believe we can lead the nation in that solution while at the same time creating enormous economic opportunities in rural places.”

USDA opened the project application process on Monday and will accept applications for the first round of funding through April 8, Vilsack said. Individuals are excluded from applying for the projects, but applications will be open to a range of interests ranging from businesses to non-profit organizations, local and state governments, as well as tribes and universities. The first funding pool will go to larger projects with proposals ranging anywhere from $5 million up to $100 million.

A second set of funding projects with a May 27 application deadline will go toward smaller-scale projects with proposals ranging from $250,000 to $4.99 million.

With funding and awards coming in two phases, that allows for projects designed with smaller producers in mind as well as farmers and ranchers who have been underserved by USDA’s programs in the past.

The $1 billion will come from USDA’s Commodity Credit Corp. (CCC), which will set off criticism from Republicans in Congress who have spent the past year questioning whether USDA has the authority to use CCC funds to spend on climate practices. Robert Bonnie, USDA’s undersecretary for Farm Production and Conservation Programs, will likely see those complaints leveled at him on Tuesday, as he is set to testify before a House Agriculture Subcommittee.

Having heard GOP complaints about tapping CCC funds all last year, Vilsack said Monday the funds would help producers develop new markets with their products through the conservation tools being implemented. He added that the projects derived from the pilots would help producers also enroll in private carbon markets.

Vilsack added: “This program is not a carbon market program. It’s focused on commodity production, and working along some of the great activity we’re already seeing in the market, we’re hopeful that we’ll see some additional adoption of climate-smart practices across all regions of the country and all commodity types of producers to be able to partner to obtain those private-sector markets, another revenue source, if you will, for farmers.”

Vilsack also stressed that taking $1 billion from CCC would not hinder the ability of the funds to serve other purposes, such as funding the commodity support programs in the farm bill.

“Let me be clear: This $1 billion commitment will in no way interfere with our ability to use the Commodity Credit Corp. for other purposes, including farm bill programs,” Vilsack said. “We are confident we have the resources to be able to do it.”

Vilsack had barely finished his announcement when Sen. Roger Marshall, R-Kan., a member of the Senate Agriculture Committee, sent out a news release and letter to the secretary raising concerns that USDA is trying to bypass Congress to create its own farm bill. Marshall sent a list of questions to USDA and wanted answers by the end of the week.

“While I am a staunch supporter of conservation and believe farmers are the original conservationists, I write today with concerns that USDA is using the Commodity Credit Corp. (CCC) account in an attempt to circumvent the farm-bill profess where programs are established with congressional consent,” Marshall stated in his letter to Vilsack.

“This is about partnering with farmers to tackle the climate crisis,” Stabenow said. “It’s critical that we make sure that climate-friendly practices are profitable and practical for farmers — no matter what crop they produce, what region they’re in, or the size of their operation. The urgency of the climate crisis demands action, and I look forward to reviewing the feedback and data from these pilot projects, which will help inform the writing of the next farm bill.”

Rep. David Scott, D-Ga., chairman of the House Agriculture Committee, said he has championed farmers and ranchers to take a leading role in dealing with climate change. He also said the partnership would help farmers, ranchers and foresters market their commodities. Scott added, “The Commodity Credit Corporation (CCC) gives Secretary Vilsack broad authorities, and I’m glad to see he is using those authorities to provide opportunities that are good, not only for the environment, but for producers’ bottom lines.”

The Food and Agriculture Climate Alliance (FACA), a coalition of more than 80 agricultural and conservation groups, also stated the collective organizations “strongly commend USDA for advancing a voluntary, incentive-based approach to deploy climate-smart practices on working lands” through the partnership. FACA stated the pilot projects were structured in a way consistent with the alliance’s recommendation’s last year.

“We share Secretary Vilsack’s optimism that this approach will support climate-smart commodities while unlocking new market opportunities and we believe it will build confidence in the climate benefits of advanced farming and forestry practices,” FACA stated.

The USDA pilot projects also come after the Bipartisan Policy Center last week released a report on climate solutions that said it is time to “jump-start a rapid scale-up of farm- and forest-based carbon solutions.”

The report calls for an increase in conservation program spending and use of CCC funds to support climate-smart practices, leveraging carbon markets and supply chain initiatives.