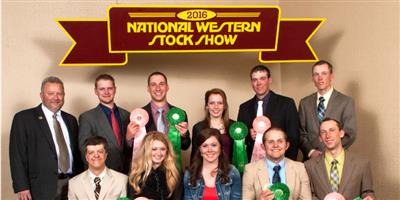 The University of Wyoming Livestock Judging team posted its best scores since at least 1995 in all categories at the National Western Stock Show en route to its sixth-place finish among 24 teams, according to coach Caleb Boardman.

The Denver competition Jan. 14-15 was the second over the holiday break. The team finished third among seven teams at the Arizona National in Phoenix on New Year’s Eve, said Boardman, who added he only has records dating back to 1995.

Students returned from break on Dec. 28 and were on the road until Jan. 16.

“While most other students were enjoying Christmas break, students on the livestock judging team were hard at work preparing for the team’s first two contests,” Boardman said.

The team travelled almost 4,000 miles, judged over 100 classes of livestock and gave over 50 sets of reasons, he said.

“The hard work definitely paid off as the team got off to a great start for the year,” he said.

The team finished second in reasons and sheep/goats, and third in cattle and hogs at the Arizona competition.

At the Denver competition, UW was first in placings, fourth in hogs, tied for fifth in sheep/goats and seventh in cattle and reasons.

There were 117 competitors at the Denver show. Individual results included:

The team competes next at the Sioux Empire Farm Show Jan. 30 in Sioux Falls, S.D.