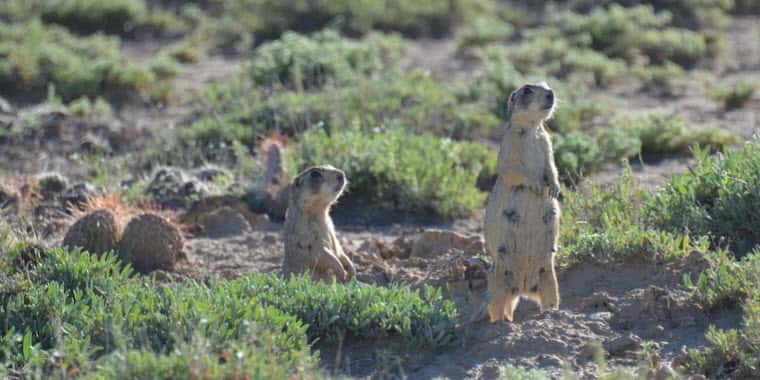 Ranchers have known prairie dogs can reduce rangeland forage by as much as half, but prairie dogs may significantly increase the quality of forage that regrows, according to research by a University of Wyoming master’s student.

Her preliminary data is based on forage quality samples collected on and off prairie dog colonies from four sites in the Thunder Basin National Grassland in June, July and August and biomass samples in August.

Prairie dogs foraging and associated soil disturbance removes dead plant material, establishes grasses and forbs in a high state of nutrition and maintains that quality for a longer period of the growing season, she said.

“That can be a benefit to cattle,” said Connell, a student in the Department of Ecosystem Science and Management in the College of Agriculture and Natural Resources.

“It’s almost like extending the growing season, and those are all benefits to cattle and other wildlife,” she said.

Prairie dogs decrease forage and make holes, and producers worry about cattle breaking legs. She is well aware of the nuisance factor to ranchers and the conservation status of prairie dogs.

“We looked at whether there were tradeoffs to be had between the two and looked at how prairie dogs can improve the quality of forage for cattle,” she said.

Researchers collected two types of samples: a composition sample of all the grasses and forbs and another of only western wheatgrass.

The reduction in total forage biomass is probably dependent on prairie dog density and colony age, she said.

Some test sites were on U.S. Forest Service land and some on private land, and she said she’s lucky to have local landowners and stakeholders involved.

Connell will provide them the results and added she doesn’t think they will be surprised. She believes they are waiting to see what the tradeoff will be between quantity and quality.

“The biggest point people would argue, and they are right to argue, is the difference between quality and quantity or those tradeoffs,” she said. “That is something we are going to tackle next. If you were going to decrease the biomass by this much but it’s more nutritious – what does that mean for how many head of cows you can put out?”

Connell said finding ways for cattle and prairie dogs to co-exist is critical, and simply categorizing prairie dogs or cattle as either good or bad is an oversimplification of this complex and controversial issue.