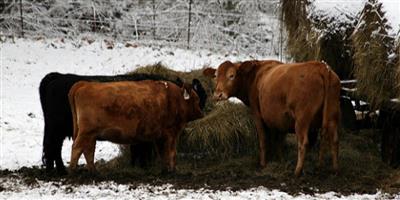 You thought you were just feeding silage or hay to cows these frosty winter mornings, didn’t you?

The microorganisms included in your livestock feed are very small and their names harder to pronounce than Angus, Hereford, Simmental, Charolais or Blonde d'Aquitaine – maybe not that last one – but chances are the next time livestock producers gather, “bacterioidetes” or “firmicutes” won’t be rolling off their tongues.

Those two and others like them are microorganisms Hannah Cunningham is studying at the University of Wyoming to determine their effect – if any – on feed efficiency in cattle.

They’re part of the rumen microbiome – the microorganisms that ferment ingested feed in the giant vat that is the cow’s digestive systems. Cunningham is trying to determine if a specific microbiome can make an animal more feed efficient than another.

Feed efficiency is a critical area of research for production livestock, said Cunningham, a Ph.D. student in animal science in the College of Agriculture and Natural Resources.

“If we can make improvements there, producers are going to benefit, especially given all the pressures we have – increased demand for product but also less land, drought and feed prices,” she said.

Cunningham studied feed efficiency in the small intestine for her master’s thesis.  “I’m continuing a similar line of research, just shifting up the digestive tract a step,” said Cunningham.

Bacteria numbers are huge. There is an estimated 100 trillion bacteria cells in the human gut, and effects of the microbiota go beyond digestion. Research in humans indicates it affects cognitive function and even behaviors such as social interactions. Some research studies its effects on mental health.

Cunningham’s study includes Angus and Charolais to look at various breed effects, and calves were born between August and Halloween last year. Most were born naturally, but there were some caesarian sections to see if microbiome effects vary by birth method. Rumen samples were taken 24 hours after birth and then on day 3, 28, and another will be done after the calves finish their 70-day feed trial post-weaning.

Rumen fluid is sucked via hose and syringe, flash frozen on dry ice and the DNA isolated. They’re then shipped to the University of Missouri DNA Core Facility for sequencing where a dataset will produce an operational taxonomic unit, a scientific term for closely related organisms.

A sequence that’s 97 percent similar or greater is considered the same species.

“These datasets yield an enormous amount of data, oftentimes over thousands of species identified per sample,” said Cunningham, whose parents, formerly of Kaycee, own the Cunningham Cattle Company near Meeker, Colorado.  “We use a customized computer program that identifies these microbial organisms based on their DNA sequence generated from the University of Missouri DNA Core Facility.”

Those groups will be matched with the calves and their feed efficiency performance.  Average daily gain, gain-to-feed and other traditional measures will also be monitored.

Some profiles may indicate a higher feed efficiency – or not.

Cunningham said the benefit to producers may seem far removed, but previous research in sheep has shown a core set of microbes are associated with more feed-efficient animals. That may happen with cattle. If so, rumen content can be transferred to another calf or via probiotics, and that can be done on the ranch or farm.

Besides the on-the-hoove benefits, studies will also contribute to knowledge about the rumen.

Further research will help identify when changing the bovine microbiome could be best.

“I think it’s critical we find that time where it’s best to intervene so you can avoid the added cost of having to do it at birth, weaning or when yearlings,” Cunningham said. “I think that could be way more affordable to producers.”