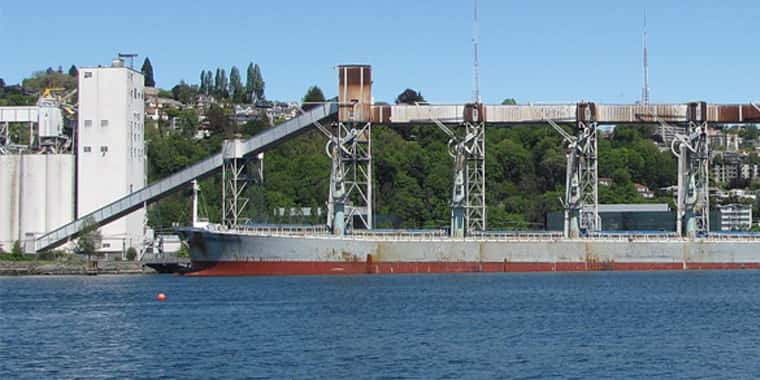 Despite pressure to provide inspections, Secretary Vilsack said “it is incumbent on me to make sure that any decisions are made with safety in mind.”

OMAHA (DTN) — Randy Suess may be on his combine seat in Whitman Co., Wash., but the export markets are on his mind.

Ninety percent of his crop floats down the Columbia River for export through grain terminals in Vancouver, Wash., or Portland, Ore., where a simmering labor dispute just boiled over, essentially closing the largest export facility in the Pacific Northwest.

Contract negotiations between the International Longshore and Warehouse Union and two export facilities, United Grain Co. and Columbia Grain, have been ongoing for nearly two years. The grain companies locked the union out in February 2013, but kept operating on replacement labor.

The dispute didn't affect the flow of grain until Washington's governor pulled the state trooper security detail that escorted state grain inspectors across the picket line on July 6.

Agriculture Secretary Tom Vilsack has declined to send in the Federal Grain Inspection Service despite numerous requests from United Grain, the National Grain and Feed Association and several legislators. Grain cannot be exported without inspection, and the decision effectively shuts down United Grain's operations.

“The only good news about the whole deal is that there are other exporters down there,” Suess told DTN from his combine, referencing the three other export terminals in the Portland area. United Grain represents 20{ba1edae1e6da4446a8482f505d60d3b8e379ff6dedafe596d9ba4611a4e33a48} of the capacity of the entire Pacific Northwest shipping corridor.

“I think the worst part of the whole deal is that they're mandated by federal law to provide these inspections. We're not getting any help from Vilsack, and we definitely didn't get any help from our governor.”

Washington pulled its inspectors from the United Grain facility due to safety concerns, Vilsack told reporters on a conference call Wednesday. Despite pressure to provide inspections, Vilsack said “it is incumbent on me to make sure that any decisions are made with safety in mind.”

The secretary noted that there is increased traffic in other ports where federal inspection is taking place, specifically the Columbia Grain facility in Portland that's also in labor talks with the ILWU.

United Grain said it agrees that safety should be a top priority, and offered USDA several solutions in a press release on Thursday, including paying to bring in inspectors by helicopter, by the employee bus or by the vehicle and security detail of USDA choosing. United Grain would cover all costs.

The Washington State Patrol conducted a security review of how United Grain transports its non-union employees across the picket line, and concluded it was safe and secure. There have been no direct threats or crimes targeting Washington State Department of Agriculture grain inspectors, but several instances have been investigated by Vancouver police that caused WSDA employees concern, the press release said.

It also notes that USDA completed three separate security assessments, all of which ended with a verbal confirmation to United Grain employees that crossing the picket line through the gate that employees use is safe. GIPSA's Safety and Occupational Health manager conducted the first two, one in October 2013 and one July 15-17, 2014. The third inspection was conducted by the director of APHIS's Emergency Management, Safety and Security Division as well as APHIS's Aviation Safety/Security Specialist from July 28-31, United Grain stated.

“As the U.S. Department of Agriculture is mandated under the U.S. Grain Standards Act to provide official inspection and weighing services for exports of U.S. grains and oilseeds, we urge Secretary Vilsack to utilize any of the methods offered by UGC, which have been deemed safe by the USDA's own safety experts, to immediately resume grain inspections,” the release stated. “With harvest upon us, a disruption of this magnitude in the supply chain will create irreparable damage to U.S. farmers and the reputation of the U.S. as a reliable supplier.”

The House Agriculture Committee is on United Grain's side. In a letter to Vilsack, the committee explained it has been denied access to USDA's security reports. The committee was briefed by GIPSA's administrator, Larry Mitchell, but when the committee staff pressed for details about the security concerns, Mitchell was unable to provide specifics, the letter stated.

“As someone who has spent considerable time and energy fighting to open international markets for our agricultural products, we know you are concerned about the potential loss of those markets due to the closure of this important export terminal. We ask once again that you immediately restore inspection services so that grain exports can resume,” the letter stated.

Suess, who's also a member the Washington Grain Commission, said the timing is unfortunate because a delegation of wheat buyers from South Korea visited last week and a Philippine delegation arrives Monday.

“It's one of their big concerns: What are you guys doing to make sure that we can keep the flow of wheat going?” Suess said.

A lot of farmers have presold what needs to be moved to market, he added. Getting that wheat to market is as important to the farmers as it is to the buyers.

“It's kind of like when Jimmy Carter put the embargo on Russia. Sometimes you lose those markets and you never get them back,” Suess said. “That's a big concern of ours. We'll get Japan and Korea and Taiwan to come back, but we've got a lot of other markets that buy hand-to-mouth from us. I would hate to see them go to somebody else who's seen as a more reliable supplier.”

Mary Kennedy, DTN cash grains analyst, said shipments can be made if the buyer agrees to a third-party inspection, but that doesn't include things like phytosanitary certificates that most buyers rely on. Two ships carrying approximately 3 million bushels have been shipped this way, compared to 17 mb of shipments scheduled for August.

To complicate matters, the BNSF railroad put a permit embargo on the facility, making it hard for elevators to bill loaded trains to United Grain if there is a backlog at Vancouver.

“With the large spring wheat crop looming in North Dakota and Montana, grain elevators and farmers will feel the effect of UGC's inability to export wheat, or any grain for that matter,” Kennedy said. “Basis levels for DNS 14 protein were weaker last night, and shuttle corn bids weakened last week but have recovered some this week. While some of that is the inability of some North Dakota and Montana shippers to receive rail cars and the high cost of freight, the closure of one of the largest export houses on the PNW will certainly exacerbate the cash prices, which in turn could be a blow to farmers who rely on selling grain to elevators that ship to the PNW.”