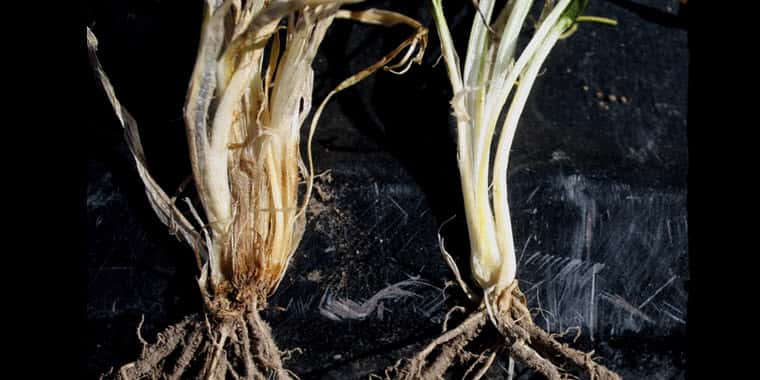 With 60- and 70-degree Fahrenheit temperatures warming the Great Plains this week, farmers may soon get their first chance to check on the condition of the wheat crop.

“You need a minimum of four days of growth — 40 degrees or above,” said University of Kentucky Extension agronomist Carrie Knott. “But it's best if you wait seven days. If you go too early to try to assess your wheat, you might miss some damage,” she added.

If you don't see immediate green-up in some fields in the coming week, don't panic just yet, Jones added. “Some varieties are slower to green up,” she said.

In the Great Plains, a sudden November freeze remains the primary source of concern for winter injury.

On Nov. 11, temperatures in Kansas abruptly plummeted roughly 50 degrees in 24 hours, landing in the single digits and hovering below freezing for nearly five days. Weeks of previously mild weather made the drop especially alarming, Jones said.

“Generally in the fall, wheat becomes acclimated to cold temperatures over a period of time and gradually slows down processes in the plant,” she explained. “During that November freeze, we went from very actively growing to a severe slowdown.”

Eddy's fields near Syracuse, Kan., were among those taken off guard by the fall freeze, but he is encouraged by the fall health of the crop. Good planting conditions allowed him to plant in mid-September, and the crop quickly put up a healthy stand.

Fields planted later and into low soil moisture may have been more vulnerable to the sudden November freeze, agronomists noted.

Fields where the crown of the plant is not sufficiently covered by soil are also at higher risk for winter injury, Jones added. For example, in fields with heavy residue, wheat plants can sometimes place the crown within the residue, instead of under the soil.

Southern wheat growers are more concerned about the early March snowstorm and cold temperatures that swept across much of the country, Knott said.

In Kentucky, a string of mild days in February may have allowed some wheat to green up before the bad weather hit, which could lead to tiller loss, Knott noted.

Farther south, in Louisiana, much of the state's wheat was in the jointing stage and more vulnerable to freeze when the recent cold spell struck, Louisiana State University AgCenter wheat specialist Josh Lofton said in a university news release.

Knott recommended growers get out and count live tillers once wheat is actively growing to assess how much damage was done. For Kentucky growers, 70 to 100 tillers per square foot should be sufficient, she said. For fields with tiller counts below 50, growers might benefit from increasing their split nitrogen applications (at Feekes growth stage 3 and 5), until 120 pounds per acre have been applied by Feekes 5.

For now, Eddy is remaining optimistic as he waits for his wheat crop in southwestern Kansas to green up. A late February snowfall has helped soil moisture levels in his area, and this week's warm temperatures are welcome, but the crop has miles to go, he noted.

“We've still got several freezes to go through before we're in the clear,” he pointed out. “But I'd say the wheat has only used two or three of its lives so far, so we still have five or six lives to go.”