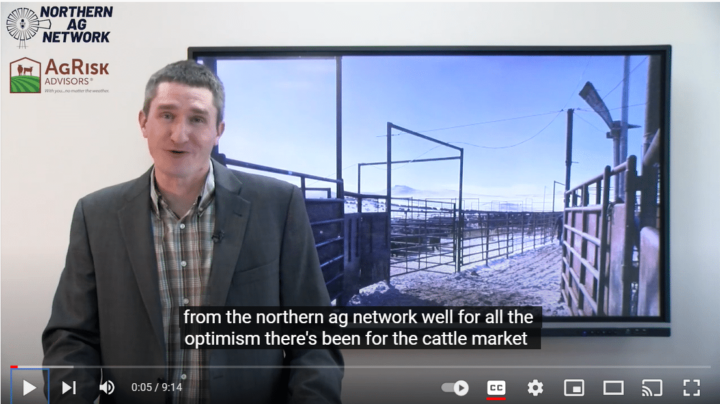 For all the optimism there’s been for the cattle market in 2022, it did face several challenges to start the new year. The cattle futures and cash were trending higher to close out 2021. But January reminded us that we’re not quite through all the headwinds.

Cattle futures did see pressure in January with the feeders catching the brunt. First off, right at the start of the year, we saw COVID cases increasing nationally and that slowed down the processing pace as some packers were forced to operate with reduced capacity. By the middle of January, we were 60,000 head under the harvesting pace target and while that did improve as the month wore on it definitely took some money out of  the cattle market.

The Cattle on Feed report was expected to have total on feed inventory down slightly from a year ago, but actually came in higher. The placements numbers were where it got really bearish: triple what was expected with 6% higher placements and that did force the market lower.

The cash market was pretty interesting with all those bearish factors  you’d think the cash would plummet, but it only dropped about $2 to $3. That’s not exactly good news. But considering how poor Packer participation was in the cash market, we could have seen that price fall even further. The volume of cash sales  were down 29% from a year ago.

The cattle inventory report gives us an idea of where we’re at as far as the cattle cycle goes and measures contraction in the beef cow herd. USDA said that the beef cow numbers were down 2% from the year prior at 30.1 million head and that’s the smallest since 2015. 2% contraction may not sound like much. It’s actually the steepest contraction we’ve seen since the drought of 2012. In the state by state numbers across the West  Montana was down 6% and beef cattle numbers North Dakota down 2% to South Dakota 11%. Lower Wyoming Colorado and Nebraska all down 3%.

Looking at the current drought monitor map the drought is moving south and it’s moving east so it’s possible we see that drought linger or move into some other areas and contraction is likely for another year. Especially with the replacement heifer number in that inventory report down 3% from year ago so we’re likely to see numbers continue to march lower here through 2022.

The positive aspect is we’re bringing supplies down and leverage is going to return to the cattle producer and hopefully profitability will improve as well.