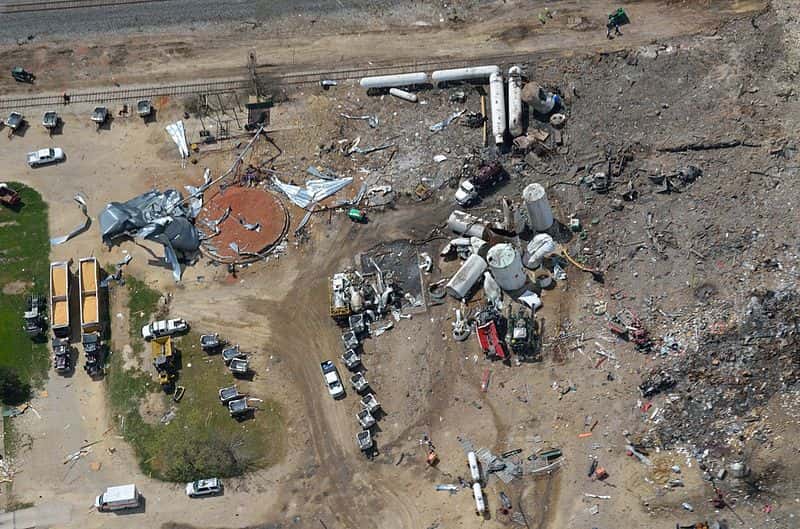 West Blast Preventable, Others at Risk

West Blast Preventale, Others at Risk

OMAHA (DTN) — The community of West, Texas, was unaware of the potential danger of ammonium nitrate stored at West Fertilizer Co., and many other communities across the country are at risk of a similar disaster, according to the preliminary findings of a year-long investigation by the U.S. Chemical Safety Board released Tuesday.

The board found failings at all levels of government led to the ammonium nitrate explosion that killed 15 and injured more than 200 people in West last spring.

CSB Supervisory Investigator Johnnie Banks said in a statement that farm communities across the country are starting to wake up to the risks.

“We found 1,351 facilities across the country that store ammonium nitrate,” he said. “Farm communities are just starting to collect data on how close homes or schools are to AN storage, but there can be little doubt that West is not alone and that other communities should act to determine what hazards might exist in proximity.”

The CSB findings confirm what DTN's research found last year — that many small communities across the country have large AN stockpiles near residential areas, http://tinyurl.com/….

Among the findings, CSB said it could find no zoning or other laws preventing residential development that took place near West Fertilizer.

“No federal, state, or local standards have been identified that restrict the siting of ammonium nitrate storage facilities in the vicinity of homes, schools, businesses, and health care facilities,” CSB said. “In West, Texas, there were hundreds of such buildings within a mile radius, which were exposed to serious or life-threatening hazards when the explosion occurred on April 17.”

The explosion that occurred in a wood-framed building at West Fertilizer on the north edge of town destroyed a nearby nursing home, school and hundreds of residences. West Fertilizer's location predated development that later filled in around the facility.

CSB said although some AN distributors have constructed fire-resistant concrete structures for storage, “fertilizer industry officials have reported to the CSB that wooden buildings are still the norm” for storing and distributing AN across the country.

In addition, questions have been raised about the preparedness of volunteer firefighters in West and across the country.

Firefighters in West “were not made aware of the explosion hazard from the AN stored at West Fertilizer, and were caught in harm's way when the blast occurred,” CSB said in its findings. The CSB said the blast occurred just 20 minutes after the fire started. The cause of that fire remains under investigation.

Texas State Fire Marshal Chris Connealy told DTN his office is expected to release a report in May detailing what went wrong for volunteer firefighters who responded to a fire that broke out near the ammonium nitrate storage site.

The CSB was critical of AN guidance provided by the National Fire Protection Association and the International Code Council.

“NFPA recommends that firefighters evacuate from AN fires of 'massive and uncontrollable proportions.' Federal DOT guidance contained in the Emergency Response Guidebook, which is widely used by firefighters, suggests fighting even large ammonium nitrate fertilizer fires by 'flooding the area with water from a distance,'” CSB said.

“However, the response guidance appears to be vague since terms such as 'massive,' 'uncontrollable,' 'large,' and 'distance' are not clearly defined.”

CSB pointed out that a lack of a statewide Texas fire code and a law that prohibits “most smaller” rural counties from adopting codes, contributed to the disaster.

“McLennan County, where the West facility was located, had not adopted a fire code, although it technically had the authority to do so because of its proximity to the more populous Bell County,” CSB said. “The West Fertilizer facility was thus not required to follow any NFPA or ICC recommendations for the storage of AN.”

CSB was critical of how the U.S. Environmental Protection Agency has interpreted the Emergency Planning and Community Right-to-Know Act of 1986.

The act contains an exemption from hazardous chemical reporting for “fertilizer held for sale by a retailer to the ultimate customer.”

CSB said the EPA has “interpreted this provision as not applying to firms, like West, that make custom blends of bulk fertilizer for customers' use.”

The board found that in 2012, West Fertilizer filed an EPCRA Tier II report with the McLennan County Local Emergency Planning Committee.

“West reported the presence of up to 270 tons of ammonium nitrate, as well as anhydrous ammonia, at the site,” CSB said.

“The company did not provide the LEPC or the West Fire Department with an ammonium nitrate MSDS indicating the material's hazards, nor does EPCRA automatically require that information to be provided. There is no indication that West's filing with local authorities resulted in an effort to plan for an ammonium nitrate emergency.”

CSB Chairperson Rafael Moure-Eraso said in a statement that the board's investigation shows the disaster could have been avoided.