What Is The Outlook For World Durum Production?

Global durum production is expected to rebound in 2022/23, but stocks are likely to remain tight this season.

Last year, leading durum producers, including the United States and Canada, experienced hot weather and dry conditions that drastically cut production. Worldwide, beginning stocks of durum, according to Stratégie Grains, are 7.9 MMT, 1.6 MMT less than 2021/22. However, unlike last year, durum production estimates outside the E.U. and North Africa look good.

Italy is by far the largest European durum user. Demand is pegged at 6.1 MMT. It produces a sizeable domestic crop but is experiencing a severe drought this year. An extremely dry winter and spring followed by hot weather since late spring has left the growing area parched, leading to the worst conditions in 70 years. The Italian government this month declared a state of emergency.

Heat is On in Europe

According to Coldiretti, an Italian agricultural lobby, the country’s durum and “common” wheat production this year is expected to fall 15% as the drought slashes yields. The Italian Millers’ Industrial Association expects durum production to fall 10% to 3.5 MMT.

Italian durum production, estimated at 3.4 MMT, is expected to fall 2.6 MMT short of total demand. According to USDA sales data, for the 2022/23 marketing year, which began June 1, U.S. durum sales to Italy are up 124% compared to the same time last year. 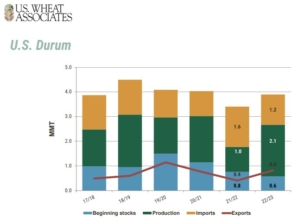 More Durum, More Sales. USDA’s first forecasts of U.S. durum production and exports in marketing year 2022/23 are up significantly. The market will be watching conditions closely from now until harvest.

Canada, usually the largest durum exporter globally, saw sluggish durum exports in the 2021/22 season. Western Canada experienced a devastating drought in 2021, which slashed yields and cut production by 53%. According to Statistic Canada, durum exports were 60% behind their 2020/21 pace through February, the latest data available.

This year looks different. Statistics Canada projects a 75% increase in supply. Canadian production is forecast at 5.52 MMT in 2022/23 due to increased seeded area and improved yields. Exports are also expected to increase 72% to 4.3 MMT.

Durum production dominates Mexico’s total wheat production. USDA’s Foreign Agricultural Service in June 2022 dropped its forecast of Mexican wheat production slightly to 3.26 MMT for 2022/23. This change was based on information from industry and official government sources, reflecting unfavorable weather conditions and other factors. Mexico’s total durum and wheat exports are forecast at 850,000 MT.

The tight ending stocks and a poor European harvest kept durum prices initially high at the start of 2022/23. Now increased planted acres and a positive outlook for the upcoming harvest have created an optimistic outlook for the North American durum crop and potentially easing export prices. However, another year of tight supplies and unknown variables, especially weather, between now and harvest could mean price fluctuations for the marketing year ahead.