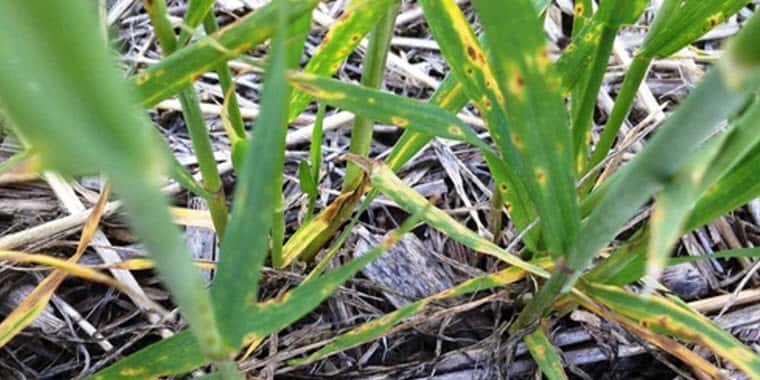 Wheat Diseases: What to Watch for This Spring

The 2016 winter wheat growing season started with good crop establishment last fall. The heavy foliage produced last fall may have provided good inoculum build-up for spring infections to take place (Figure 1). Additionally, the mild winter may have led to the survival of several pathogens that would normally be killed. These conditions are contributing to an earlier than usual disease onset in winter wheat.

Another disease that develops early in the season is Tan spot (Pyrenophora tritici-repentis). The tan spot pathogen survives on wheat residue and has a wide temperature range during which infection can take place. Symptoms include dark tan spots surrounded by a yellow halo on the lower leaves (Figure 2). Tan spot can be found in almost every wheat field but severity is usually high in no-till wheat following wheat.

Figure 2. Tan spot symptoms on leaves. Notice the dark center and a yellow halo around the lesion and also the heavy wheat residue.

Flag leaf emergence is the recommended wheat growth stage for applying fungicides. Protection of the flag leaf and the leaf below flag leaf provides the best yield response. However, with early stripe rust developing now in winter wheat, an early fungicide application may be warranted. The decision to apply a fungicide should be based on the level of disease developing, the resistance rating of the cultivar planted, weather conditions in the forecast (drier conditions will limit disease progress), and grain prices. For fungicides that are effective against stripe rust and other fungal leaf spot diseases, see the fungicide efficacy table produced by the North-Central Wheat Pathology Working Group. Consult the 2016 Wheat Pest Management Guide for information on products labeled for use in South Dakota.