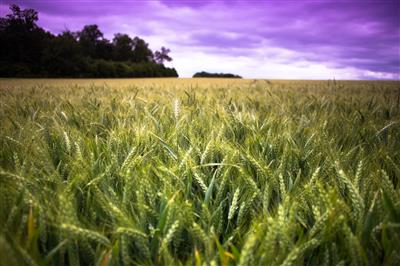 When is it Too Late to Plant Wheat?

April of 2018 may go down as one of the coldest on record. Typically, spring fieldwork begins in South Dakota in early April or even March. This year it will most likely be the first week of May at the earliest in most areas of the state. Farmers have begun to consider switching acres away from small grains and into later-planted row crops such as corn or soybeans. One producer asked ‘When do I start losing yield?’ That can be a difficult question to answer definitively, as weather variations are such a large factor in the final yields of spring wheat.

Hard Red Spring wheat is one of the most tolerant crops to cold temperatures and frost events. Germination and growth will begin when the soil temperature reaches 40°F. It should be planted as early as possible since cooler weather from emergence to the early reproductive stages generally benefits tiller formation and the development of larger heads. Increased growth during the early season typically results in higher yields.

For example, a study in North Dakota showed that spring wheat planted on May 1st had six fewer days of growth from emergence to 6-leaf stage when compared to wheat planted on April 15th. The number of days was further reduced to eleven when planting was delayed until May 15th. Yield data related to this research suggests that wheat loses 1.5% of its yield potential every day after the optimum planting date. However, this can vary greatly from season to season.

Optimum planting dates of course vary according to location but the generally agreed upon optimum range is from about April 1st through the 25th. Obviously, we’re already well past that but that doesn’t mean producers should start moving away from Spring Wheat.

If conditions are right, late planted crops can still produce strong yields. In 2015, the SDSU Extension spring wheat variety trial plots were planted on April 13th in Volga, SD and May 1st in Selby, SD. The average yield in Volga was 57 bu/acre and the average yield in Selby was 71 bu/acre.

The wild card in this situation is the weather in June and July. Wheat is highly susceptible to heat during pollination and grain fill. Prolonged exposure to daytime temperatures above 85-90°F and especially nighttime temperatures above 70-72°F during these growth stages can drastically reduce yields, especially if soil moisture levels are low. At present, the National Weather Service is calling for equal chances of above or below normal temperatures in the May-July timeframe. Decisions on weather risk are ultimately up to each individual producer.

Farmers Happy to be Back in the Fields After Wet Spring