Last week, reports began flowing in of an agreement between the United States and the European Union concerning the long-standing dispute on beef. We’re hearing that the U.S. and the EU have reached an “agreement in principle” on allowing the U.S. a guaranteed share of the EU’s annual 45,000-ton quota for hormone-free, high-quality beef imports.

The U.S. and the EU have a long-standing dispute over the EU’s decision to ban hormone-treated meat. This disagreement has led to a range of dispute settlement proceedings and discussions with the World Trade Organization, with the U.S. contesting the EU’s decision to ban hormone-treated meat despite the overwhelming scientific evidence that this product is safe for consumers to eat. The EU currently restricts most meat imports to a limited quantity of beef that is certified as produced without the use of hormones.

Fully implemented in 1989, the EU ban covers six growth promotants that are approved for use and administered in the U.S. The ban permanently covers one hormone – estradiol – 17β- and provisionally bans five other hormones. In response to the ban, the U.S. instituted retaliatory tariffs on EU imports, and by 1996 both the U.S. and the EU had requested WTO consultations in an attempt to resolve the dispute. In August 1997, the WTO settlement panel released its report, agreeing with the U.S. that the ban was in violation of the WTO’s sanitary and phytosanitary agreement, which both the EU and the U.S. must abide by. A WTO appellate body later confirmed that the ban violated the EU’s obligations, but gave the EU the option of conducting a risk assessment of hormone-treated meat. Following this decision, the EU commissioned several research studies that it used as a basis for justifying the ban, claiming to have conducted a thorough risk assessment into the issue. U.S. trade and veterinary officials, however, rejected the studies, noting that the evidence presented did not establish a risk to consumers from eating hormone-treated meat. Furthermore, according to the U.S., the EU ignored numerous scientific studies demonstrating the safety of eating hormone-treated meat.

Claiming that it had fulfilled its obligations under the agreement, the EU initiated a new WTO dispute settlement proceeding against the U.S. and Canada in 2005. In 2008, a WTO panel faulted all three parties on various aspects of the dispute. The WTO panel found that the EU had still not presented sufficient scientific evidence to justify the ban, while the U.S. and Canada had made procedural violations in maintaining their imposed trade sanctions. Ultimately the appellate panel issued a mixed ruling. It allowed for continued retaliatory measures from the U.S. and Canada, but also allowed for the ban to continue. In May of 2009, the U.S. and the EU signed a memorandum of understanding addressing this dispute. The MOU set up a new tariff rate quota for U.S. hormone-free, high-quality beef. In exchange, the U.S. would not increase duties on selected EU exports to the U.S. and would eventually remove all the retaliatory tariffs.

The U.S. exports beef to the EU primarily under two tariff rate quotas: the high-quality beef quota and the Hilton quota. U.S. beef exports to the EU must be certified under the Non-Hormone Treated Cattle Program. Although one of the TRQs has the product as the title, both of the TRQs are for high-quality, grain-fed beef.

With a tariff rate of 0 percent for beef, the HQB quota is the more preferable of the two quotas for U.S. exports. Typically, U.S. beef enters the EU under the Hilton quota as a last resort when the HQB allocation is exhausted and U.S. beef is needed in the EU. The out-of-quota rate for most cuts is cost-prohibitive for importers and considering the higher cost of producing the animal to EU requirements, importing U.S. beef would be unprofitable for EU end-users.

The EU beef market can generally be segmented by quality; the higher-quality beef market (think steaks), which is generally sourced from beef cattle, and the lower-quality beef market, which is largely supplied by culling dairy cattle and from lower-quality Brazilian imports for the processing sector. The demand for high-quality beef has been increasing, driven in part by strong demand from the food service sector, particularly in Germany and Italy. Some of this demand is being met by imports of high-quality beef from Argentina, Uruguay, Australia and the U.S., but the imports are restricted under the HQB Quota and the Hilton Quota.

With the opening of the HQB quota, the U.S. saw increasing imports into the EU. This peaked in 2015 at a level of $272 million, and since then has declined every single year, with the sharpest decline, 23 percent, in 2016. The 13 percent increase in U.S. imports in 2015 was in contrast to declining imports from other top countries. On the flip side, as U.S. imports declined in 2016, imports from Argentina and Uruguay increased, with Argentina seeing bigger increases every year through 2018. 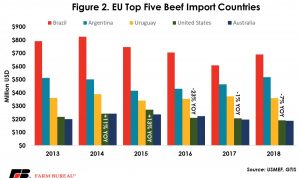 While these are total import numbers as opposed to imports under just the HQB quota, the data reflects the general storyline coming from those involved in exporting U.S. beef: U.S. product under the quota is getting squeezed out by these other countries. With Argentina’s and Uruguay’s growth coming at the expense of U.S. suppliers, some estimates place the U.S. market share of the quota at less than 30 percent. The HQB quota is also a very competitive quota, which has exacerbated the erosion of the U.S. market share under the quota.

Brazil is by far the largest exporter of beef to the EU, particularly by volume. The bulk of Brazil’s exports to the EU is lower-quality beef used for processing. In contrast, the U.S., Argentinian and Uruguayan exports to the EU are mostly high-quality and high-value cuts, leading to a difference in market shares between countries when comparing imports on a value basis against imports on a volume basis. 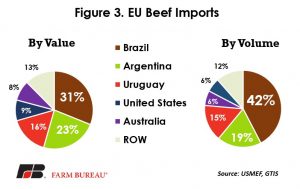 At this point, it may be best not to speculate on any specifics of the “agreement in principle” as it could change. Ultimately, the EU presents an attractive market for U.S. beef producers. High-quality beef is in high demand, and with supply constrained as it is, U.S. beef producers would likely benefit from any increase in duty-free access.