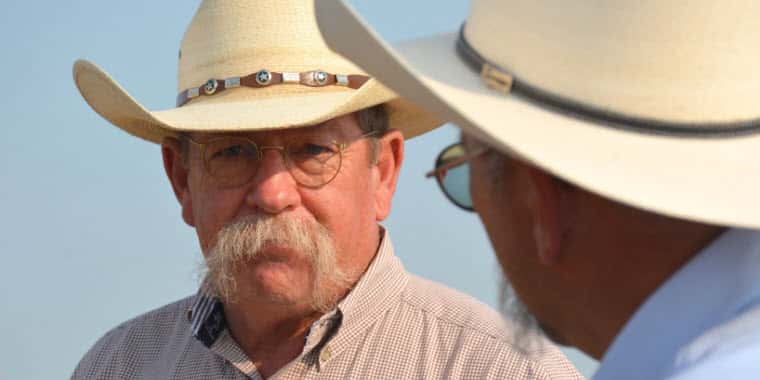 Glendo rancher Larry Cundall was one of 12 people recognized in ceremonies Oct. 26 in Washington, D.C., for exemplary leadership and innovation in agricultural production and education.

Cundall was the only rancher honored in the White House Champions of Change for Sustainable and Climate-Smart Agriculture program.

During a panel presentation in the Eisenhower Executive Office Building with other recipients – including a dairy farmer from Minnesota, a rice farmer from Mississippi, and a garbanzo and garlic grower from California – Cundall was asked to define sustainability.

“In Wyoming, it’s pretty simple,” he said. “If it’s profitable and the land stays good for the next generation, that’s sustainable.”

The Champions of Change program features individuals doing extraordinary things to inspire and empower members of their communities, according to the White House.

Cundall, a Vietnam War Veteran and fourth-generation rancher, was recognized for managing his land for increased productivity while protecting wildlife and natural resources.

He manages water to decrease water use and labor costs; he has switched from windmills to solar wells and has added miles of waterlines for better water use and grazing distribution, the White House noted.

Cundall has served more than 25 years on the Administrative Council of the U.S. Department of Agriculture Sustainable Agriculture Research and Education (SARE) program for the western region. The program provides USDA grants and outreach enabling farmers, ranchers, researchers and educators to develop innovations that support profitability, protect water and land and revitalize communities.

“I see this as an award for Larry personally, and also recognition for the work he has done with and for SARE,” said Jim Freeburn, regional training coordinator for Western SARE, who is based in Torrington.

Freeburn and other staff members submitted the nomination that led to the White House recognition.

During the panel session, Cundall advocated for producer-driven research based on producers’ needs. He called it bottom-up research.

Cundall represents his and his neighbors’ viewpoint as producers as a member of the advisory board of the James C. Hageman Sustainable Agriculture Research and Extension Center near Lingle. The research and extension center is part of the Wyoming Agricultural Experiment station, based in the College of Agriculture and Natural Resources. SAREC scientists study crops, cattle, and other products of importance to Wyoming agriculture.

Cundall spoke of another concern during the panel discussion.

“I think one big worry across the West is all the little towns drying up,” he said. “You see it downtown and on main street.”

He suggested more people farming and ranching could help economies and communities, and said he is mentoring a young family so they might go on to rent or buy a ranch.

When asked how he wants to be remembered as a Champion of Change, Cundall recalled getting his first calf at age six. He said the cows walked 6 miles to water. Now he’s 60, and his cattle walk a fourth of a mile.

Going back to his definition of sustainability, he said, “I represent my neighbors, because they do those things, too.”

Image provided by the UW Extension:  Larry Cundall at the James C. Hageman Sustainable Agriculture Research and Extension Center field day in August near Lingle. Cundall was honored by the White House for his leadership and innovation in agricultural production and education.