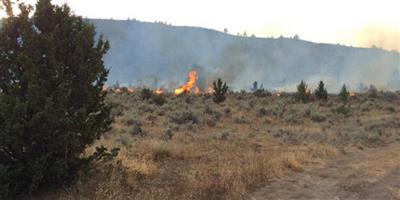 The Anderson Creek fire, as it is being called, is one of the largest in the Kansas state’s history, according to the Kansas Forest Service.  Almost 45 percent of Barber County, which is 273,000 acres or 426 square miles, has been reported burned according to state officials on 3 p.m. Thursday.  It's still burning and the high winds forecast for Friday are not anticipated to help. (Kansas, Oklahoma Wildfire May Be Fanned By Strong Winds Again)

According to the Wichita Eagle, Another 60,000 acres in Comanche County had burned by Thursday evening, according to the county’s emergency manager, damaging trees and fences.

A Kansas livestock official says the wildfire that scorched hundreds of square miles in Oklahoma and southern Kansas has displaced cattle and destroyed miles of fencing.

Todd Domer, spokesman for the Kansas Livestock Association, said Friday the most immediate problem for Kansas ranchers affected by the fire in Barber and Comanche counties is locating cattle that escaped when fences burned. He says ranchers are also working to figure out how many cattle may have died.

The KLA is raising funds to help replace the fencing, which he estimates covered tens of thousands of miles. He says hay donations have been so swift and numerous there's no longer a need.

Domer also says there would also have been a lot of newborn calves this time of year that may have either been separated from their mothers or been killed in the fire.