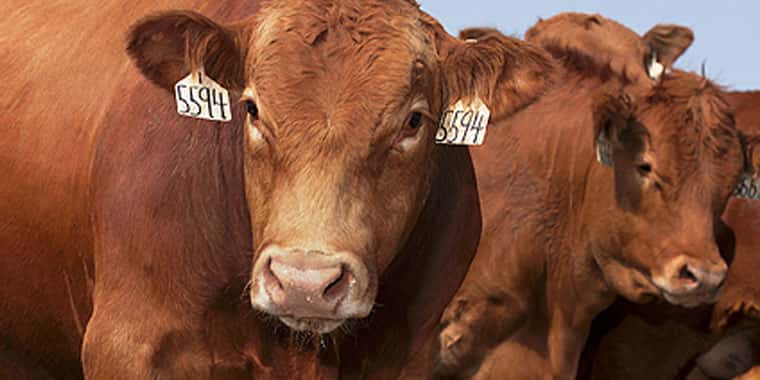 Winds Shift in the Cattle Industry

Some speculate that cheaper feedstuffs may bring feedyards back to the Midwest.

OMAHA (DTN) — Dan Morgan believes the future is bright for those willing to raise livestock, specifically cattle. It won't be easy, but nothing in agriculture is, according to the Corning, Iowa, farmer/commodity broker who has a cow/calf herd with his son Zack.

“It is going to take a special breed to be in cattle production in the future,” Morgan told DTN.

The so-called ethanol boom, severe and lingering drought in some U.S. regions, changes in land values, and even the aging of the average rancher have pushed fundamental changes in cattle production.

Cow/calf production could be shifting west in the High Plains and away from the Corn Belt. Some market trend watchers predict a return to yesteryear in cattle feeding with more animals staying in the Midwest after decades of dominance from feedlots in the Southwest.

The wild card in these trends is weather. Moisture, as much as anything, will dictate whether cattle numbers increase or decrease in a particular region.

This situation created a structural change in the cow/calf industry, according to Derrell Peel, Oklahoma State University Extension livestock marketing specialist. Most Midwestern and Southeastern states lost pasture acres and beef cow numbers during the period.

“To rebuild the nation's cow herd, I think you are going to see more numbers in the western areas of the Midwest and South,” Peel told DTN. “I think many of these eastern areas will not see the numbers they had before this change.”

DTN Livestock Analyst John Harrington agrees the majority of cow/calf herds will be in the High Plains with eastern farmers likely not willing to expand beef herds in the coming years.

“Moneywise, farmers who had cattle and pasture in the eastern areas and shifted into row crops would take some big dollars to convert land back into pasture,” Harrington said. “Plus, having livestock is a 24-hour commitment. I don't know if many of these now grain farmers would be willing to do this again.”

Harrington said it is possible former cattleman or perhaps younger first timers in eastern regions could convert acres back to cattle production. The possibility increases if grain prices stay low and cattle prices stay on the high end for an extended amount of time, he said.

DTN Senior Analyst Darin Newsom believes the number of acres which could be shifted to pasture from row-crop production in the Eastern Corn Belt in the coming years will not have much effect on the grain market.

“I don't think we are going to see a large amount of acres moved from row crop to pasture to affect the grain market,” Newsom said. “We could see some (acres) shifted but I don't think it is going to be a very large overall percentage.”

Peel sees a primary cow/calf production area in the High Plains, from the Dakotas in the north to Oklahoma and Texas in the south. The unknown is if Mother Nature will provide enough moisture, especially in the Southern Plains, to support bigger herds there.

“We lost 1.87 million of beef cattle because of drought issues since 2011,” Peel said. “We have to recover those numbers first before we can talk about expansion.” It could be 2017 or beyond to get those increases, and again only if moisture allows it, he said.

Who will be tending those cow/calf herds? Peel believes current producers, maybe some former producers, and even some younger, new producers will all factor into the equation.

Because of capital costs involved with breaking into the cow/calf industry, more cooperation will have to occur between older cattle producers on the cusp of leaving the industry and younger ones trying to get in.

“I know in many crop areas this is common with the leasing of land and working a younger person into an operation, but here in Oklahoma on the cow/calf side we don't see that much,” he said. “I think in order for some of these younger folks I see on campus now to get into the business we are going to have to see more of these types of arrangements.”

The other trend Peel sees already occurring is the migration of cattle feeding from the southwest, mainly Oklahoma and Texas, back to the Midwest, primarily Nebraska and Iowa. Peel said you can see the Southern Plains' share decreasing while the Midwest's is increasing.

“It is an ironic shift considering in the late '60s and early '70s we saw the shift of feeding cattle to the southwest and now we seeing it swing back to the Midwest,” Peel said.

Several factors make the case for Midwestern feedyards, according to Harrington.

The availability of crops and forages and different types of feeds like ethanol co-products is more prevalent in the Midwest. Ever-increasing fuel and other shipping costs for both feed and cattle favor more animals being fed out in the Midwest than in the southwest, he said.

Harrington said the severe droughts in recent years in the Southern Plains also lowered cow numbers in the south, which meant fewer calves were available to southwestern feedlots. On the other hand, northern High Plains regions didn't see cattle numbers drop as much as in the south so they currently have more calves heading to the feedyards.

Morgan, the southwest Iowa farmer and cow/calf producer, believes more Midwestern family farmers will be willing to diversify their operations in the coming years to take advantage of cattle while grain prices may be lower. This could come in the form of cow/calf herds or the return of the farmer/feeder.

“I think larger family farming operations will go to it because of the income they could make off cattle as well as if the farm has multiple people to run another enterprise,” Morgan said.

He believes the urban versus farm battle over limited water supplies in the Southwest and West will continue to make it tough on cattle feeders there.

The argument that farmers would not be willing to convert acres back to pasture because of the high costs associated with it doesn't fly with Morgan. Inexpensive fencing options such as high-tensile and electric fences, and the higher stocking rates of rotational grazing methods make Midwestern grazing more likely, he said.

“Between improved pastures and rotational grazing you can get more out of the limited number of acres you have,” he said.

Morgan said farmers who do diversify their operations will have to “enjoy” working with livestock to make it work. People who have never had livestock might have to find and have a mentor-type relationship with people in the industry or neighbors who are in the business, he said.

Kimmel Does it Again! What is a GMO?

Woman, 91, Fights Back Against PETA