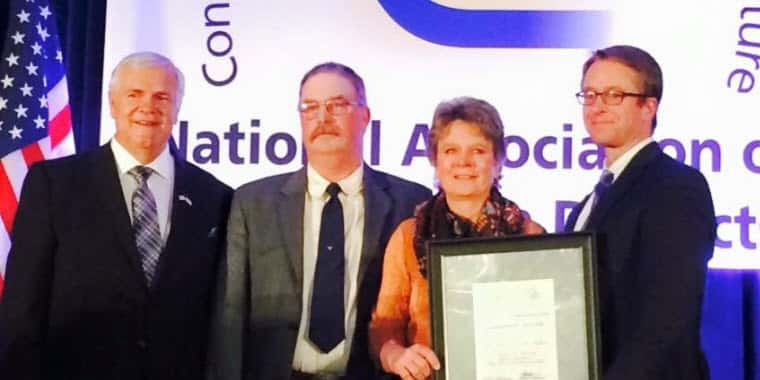 The NACD/NRCS Olin Sims Conservation Leadership Award was presented BY NRCS Chief Jason Weller and NACD President Lee McDaniel to Larry “Skip” Ahlgren and Diane Ahlgren of Winnett, Montana. The Ahlgren's were recognized for their superior service to the conservation community and commitment to promoting and leading conservation on private lands. Diane serves on the Rangeland Resources Executive Committee for the Montana Department of Natural Resources. Larry serves as Secretary/Treasurer for the Grass Range Grazing District, as one of the Directors of the Williams Coulee Grazing District, and on the Board of Directors for the Montana Association of State Grazing Districts. The Ahlgrens ranch and produce cattle on their land in Eastern Montana.

The NACD President's Award was presented to Joe Lomax, NACD Board Member from New Jersey. Lomax currently serves on NACD's Natural Resource Policy Committee, is Chairman of the Coastal Resource Policy Group and is a member of the Human Resources committee.

The NACD Friend of Conservation Award was presented to Chris Wible representing Scotts Miracle-Gro. Scotts Miracle-Gro has been a long-time supporter of NACD and continues to be an active and consistent supporter of NACD and our member districts. They teamed up with the Ohio Federation and Ohio state conservation agency to create high-quality outreach materials for districts on “Lawns and the Environment,” and then made them available to all districts at no cost through NACD. Scotts Miracle-Gro has also provided financial sponsorship of numerous NACD events such as the NACD Annual Meeting, the Spring Fly-In, and the NACD Summer Meeting. In 2011, an extra special donation of product and expertise was directed towards the NACD Service Project for the Tennessee School for the Blind where students planted a garden and had a tree planting ceremony. Scotts Miracle-Gro's most impactful donation to date is their sole sponsorship of the monthly NACD Urban and Community Conservation Webinar since its inception in September 2012. Through these webinars, NACD has reached over 1,100 district and partner representatives, many repeatedly, showcasing what is and can be done to address natural resource concerns in developed and developing areas.

The NACD Distinguished Service Award was presented to Debbie Moreland, Program Administrator for the Arkansas Association of Conservation Districts (AACD) in Little Rock, Arkansas. Debbie has been an integral part of conservation districts over the past two decades, but her greatest service to Arkansas conservation has been in her role as Program Administrator for AACD where she has championed collaborative conservation efforts throughout the state. Debbie has been the catalyst for many successful conservation partnerships. Her effectiveness can be measured in the accomplishments of the Arkansas Conservation Partnership, including the many successful Mississippi River Basin Initiative projects and her coordination of popular educational field tours.

Earlier in the day, NRCS Chief Jason Weller and NACD President Lee McDaniel announced the winners of the 2015 Earth Team Awards: the Buffalo Conservation District from Marshall, Arkansas and the Academy of Arts, Careers and Technology High School (AACT HS) of Reno, Nevada. Individually recognized were Samantha Antipa and Monique Renteria from AACT HS. The Earth Team is the volunteer workforce of NRCS, serving as an integral part of the conservation partnership.