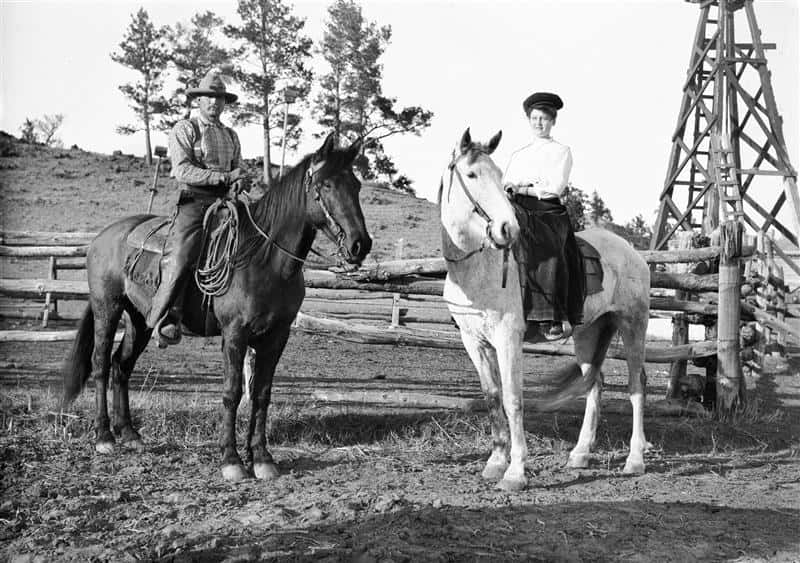 Women Stood Tall in the Saddle in Frontier Montana

They called her husband “Montana”  Bill Roberts, but Anna Roberts stood just as tall in the saddle, and just as worthy of the nickname, in the early days of Montana.  This photo was taken at the Heywood Daly Ranch near Knowlton, Montana, in 1907. Women not only kept the household going, but also pitched in on ranch work in those days…as they still do now!

Anna's husband, Montana Bill, was inducted into the Montana Cowboy Hall of Fame in 2011.

Albert (Bill) Roberts was born in Gallia County, Ohio on July 20. 1872, the youngest of ten children. His father was born in 1811 and served on the side of the Union during the Civil War. As Bill's parents were elderly and needed his help on the farm, he didn't leave home until the age of 21. From the age of 16 he kept a diary and recorded his desire to go west. In October of 1895 he wrote “decided to set out to be a roving blade''.

After leaving Ohio he spent a few years with relatives in Iowa before heading west.  On his 27th birthday he was working for the TV Ranch in Mandle, Wyoming. That fall Bill, a companion, and three head of horses headed for Texas. A few of his diary entries read as follows:

While working for the XIT he made several trips from the Fallon area to Chicago accompanying cattle to market. On one of these trips he met a young girl from Norway on her way to spend the summer on the Crackerbox Pete Ranch at Glendive. She spoke no English and he no Norwegian but the language of love knows no boundaries. Montana Bill and Anna Vaule were married in Glendive December 22, 1906. He went to work as foreman for the Haywood Daily EY (also known as the Bird) Ranch. Their first child, Daisy Mae was born the next year. In 1909 he moved his family to Ismay and started a livery barn that grew to 130 head of driving and saddle horses carrying his brand 7-U (reads 7HU)