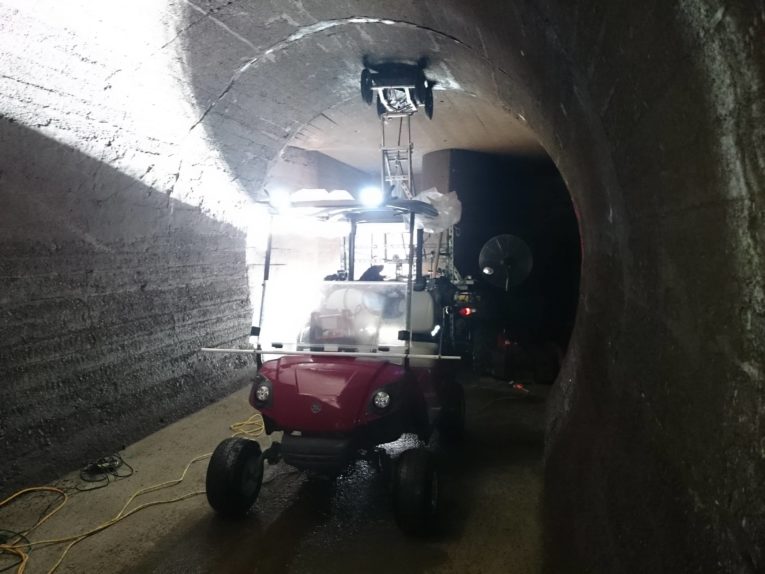 Powell, WY – The Corbett tunnel, which carries irrigation water to farms and ranches from the Buffalo Bill Reservoir west of Cody, has been doing its job without fail for over 110 years. But when a similar tunnel collapsed in Goshen County, Wyoming, in 2019, the Shoshone Irrigation District’s watermaster became concerned that something similar could happen here.

“Talking to some of the local farmers around here, we’re going, well, what do we do, you know?” recalls Trent Reed. “Has anything been done?”

And Reed explains that without the canal, the Bighorn Basin would not be able to sustain any agriculture.

“Without it, this area would be a desert – we would not have production agriculture here,” Reed says. “Fifty-four thousand acres would go without water.”

So Reed, whose family has used Ground Penetrating Radar in their farming operation, contacted Ily Nunn, who owns and operates NU Locating out of Casper. Their company created a system to use ground penetrating radar to determine the integrity of the 3.3 mile long stretch of tunnel north of Cody.

“It’s a unique technology, and it allows us to see non-metallic things in the ground as well,” Nunn explains. “So we’re able to detect rebar, reinforcement, voids, geological layers – a lot of things outside of just utilities.”

After completing their full investigation in November, NU Locating presented their findings to the Shoshone Irrigation District members at a meeting in Powell on Wednesday.

“We didn’t find anything that needs to be taken care of exactly right now,” says Pete Harshman with NU Locating. “We found a forty foot possible void, maybe 8 foot away from the tunnel, some more water in some different areas than where they are channeling water already into the tunnel.”

But fortunately, according to Reed, nothing catastrophic is on the horizon.

“This next winter, after the water’s turned out, we’ll go and do some exploratory drilling, you know, see what there is, pump grout in, addressing those situations.”

Reed says that even though the canal was built in 1908, the materials and the engineering have stood the test of time.

“They actually first started delivering water in 1909, so this project has been here for a very long time. And it’s pretty amazing to look at the infrastructure and how well it’s held up for, you know, 100-plus years.”

Reed adds that the information presented by NU Locating will help the irrigation district determine and prioritize maintenance projects for the next few years.

“We will continue to monitor, this next winter we’ll probably do some exploratory coring in the tunnel, just to make sure,” he notes. “If there’s anything there, we’ll probably pump some grout into those areas, just to solidify that, so we don’t have a void there.”

And Reed emphasizes that the money spent on the scan is a cost-effective insurance policy.

“We’re dealing with one-hundred year old infrastructures – and that’s not just here, but across the whole western United States. It’s something that everybody’s going to be dealing with somewhere down the road.”