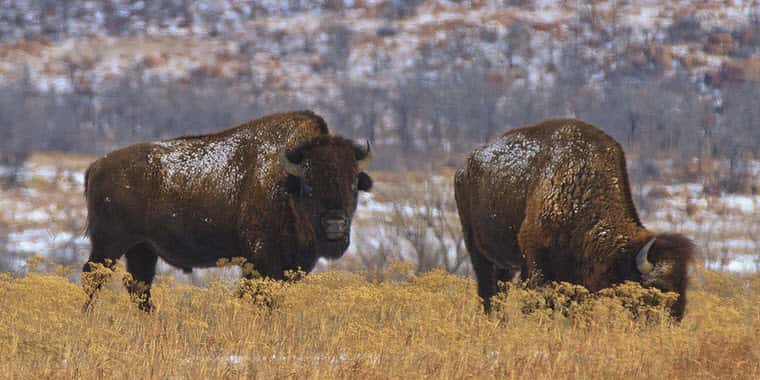 Yellowstone Under Fire for Killing Bison

A bison advocacy group is opposing the killing of up to 900 bison exiting Yellowstone National Park’s northern boundary.  So far, nearly 300 bison have been captured and will be killed.

A Yellowstone official said removal is necessary to control the population, but the Buffalo Field Campaign in West Yellowstone and Gardiner, Mont., believes the park can support more bison than allowed by the agreement struck in 2000 by the federal government and the state of Montana.

Meanwhile, a Montana livestock representative said the bison must be separated from cattle to prevent the domesticated bovines from contracting brucellosis many Yellowstone bison carry. Brucellosis is a bacterial disease that often causes female ungulates to abort their fetuses.

Although uncommon in the United States, the disease also can be spread to humans from unpasteurized milk products or handling an infected reproductive tract or fetus.

Members of the Interagency Bison Management Plan (IBMP) agreed to a plan to remove 800 to 900 bison that migrate out of the park’s northern boundary this winter to reduce population growth and the potential for a mass migration into Montana, according to a Jan. 15 National Park Service news release.

“This winter, hunting in Montana is expected to remove up to 350 bison from the population, while an additional 500 to 600 animals that leave the park boundary may be captured and transferred to tribal groups for processing and distribution of meat and other parts to their members for nutrition and cultural practices,” the release stated.

There were approximately 3,500 bison in the northern herd and 1,400 in the central herd in August, according to the Park Service.